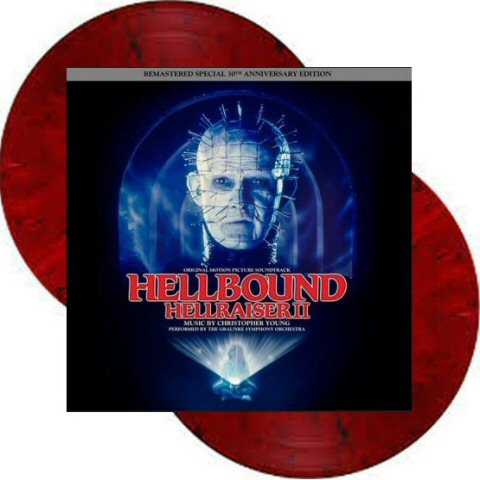 30th anniversary edition featuring music never released on vinyl before. Hellbound was the sequel to Hellraiser, and was based on a story by horror writer/director Clive Barker (England’s answer to Stephen King). The story, as with Hellraiser, revolves around the gruesome Cenobites, denizens of a particularly strange vision of hell, and those who come into contact with them via a bizarre puzzle box called a Lament Configuration (when solved, it calls the Cenobites to the user). Christopher Young, who composed the score, is an up-and-coming composer who is considered very likely to be the next Big Thing in film music, though he follows more in the tradition of James Horner than Danny Elfman. His previous credits include the original Hellraiser, as well as the first Nightmare on Elm Street and Bat-21. This score is a magnificent, overwhelming choral wonder, recorded with a large orchestra and a choir. It’s definitely big, and it’s often very dark, though it does have a tendency to scoot off into moments of utter strangeness indeed. “Hall of Mirrors,” for example, drifts back and forth between choral tonalities that pulse back and forth and a perverse twist of fairground music (echoed at the end of the movie as a moving man is confronted by a revolving monstrosity). The finest thing about the score, though, is that it stands very well by itself, devoid of the context of the picture it was written for, and would very likely go over well in concert. It has a bleak majesty that gives Richard Strauss and Richard Wagner a run for their money. This should indicate that Christopher Young is certainly a talent to watch out for. Overall, great value for the Hellbound score.