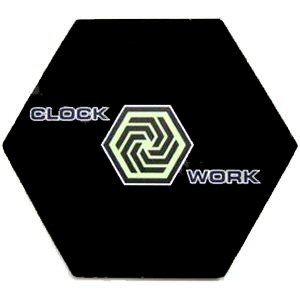 Clockwork is a rather unknown act that shoule be a sure delight for Coroner fans and other fans of technical and groove metal and thrash metal. Back in Switzerland in 1994 Coroner guitarist Tommy T Baron (Tommy Vetterli) teamed up with ex-Krokus, ex-Mekong Delta drummer Peter Haas, bass player Peter Waelty to form Clockwork. Tommy also brought in and old friend by the name of Lui Cubello to handle the vocals. Cubello had been working as a roadie for Coroner. The band made a studio session at the Watermill Studios in Switzerland and out the recorded tracks they chosed four tracks and printed a promotional cd in 1995 in a limited run of 1000 copies. This promo cd was released in a cardsleeve and it didnt take long before this cd was listed among the rare and hard to find collectables when it came to cds. Now Tommy Vetterli has agreed to release this 4-track promo onto this very limited vinyl. This 10 vinyl set also features a bonus 10 vinyl featuring 4 previously unreleased tracks recorded during the same recording session. This double 10 set are housed in a unique hexagonal gatefold cover with unique hexagonal labels in a limited run of 350 numbered copies. Coroner fans will probably suck this up immediately so my guess is that this vinyl release will be another collectable release very very soon.