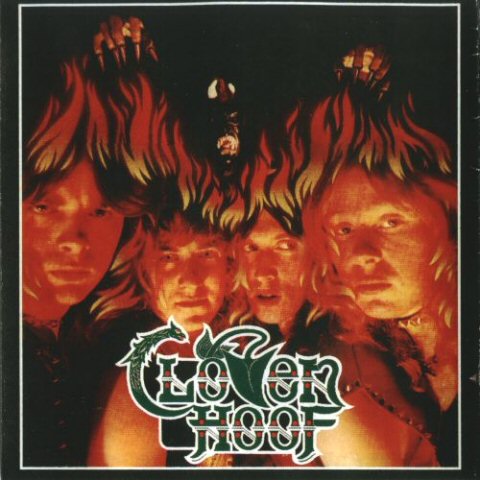 2017 Us only release featuring photos and new liner notes

Cloven Hoof burst onto the Nwobhm scene with quite some flair, featuring outlandish stage costumes and bearing the stage names of Air, Water, Earth and Fire. But this band wasnt only for the sight the music was very impressing too and the early material are considered to be among the best of the genre. The group abandoned the costumes and defied the elements by the time of this the first fully fledged debut album. Cloven Hoof, the eponymous album from 1984 boasted an impressive array of classic heavy metal songwriting, including the group’s namesake Cloven Hoof, the Old Testament-themed Return of the Passover, and the stunning The Gates of Gehenna. With their cinematic, fantasy metal lyrics, epic lengths, and complex arrangements, these efforts aspired to (and only barely fell short of) the grandeur achieved by earlier N.W.O.B.H.M. powers like Diamond Head, Witchfynde, and, most notably, Iron Maiden. The fact that Cloven Hoof had been performing many of these songs for at least four years goes a long way towards explaining their proficiency; but the band was hardly sitting on their laurels here, coming up with some exceptionally accessible new singles in Crack the Whip and Laying Down the Law. Sadly, despite their laudable efforts, Cloven Hoof ultimately failed to become the next Iron Maiden. But with this self-titled release, at least, the group scored a lasting document from the second generation of New Wave of British Heavy Metal bands.

Track listing:
1. Cloven Hoof
2. Nightstalker
3. March Of The Damned
4. The Gates Of Gehenna
5. Crack The Whip
6. Laying Down The Law
7. Return Of The Passover