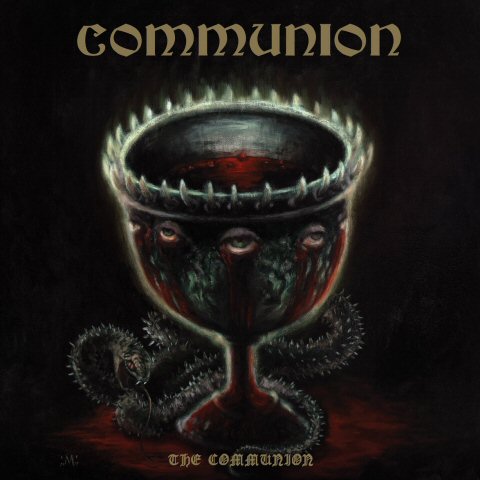 Communion, a Chilean trio whose mystique and staunchly do it yourself philosophy are supported by the impressive collection of demos and other independent releases they’ve put out since their 2008 formation. In fact, while The Communion is listed as the band’s sophomore album, it’s actually being released simultaneously with their debut. Even though the two albums were created back to back under nearly identical conditions they are generally two very different experiences in terms of sound, sub-genre subtleties, and overall songwriting. Their debut At The Announcement was recorded as a four piece band and felt like a classic example of bestial black metal and speed metal colliding in glorious lo-fi unison. The Communion is instead a purposefully streamlined step forward onto the world’s stage of underground thrashing black metal. That isn’t to say they’ve lost the spirit of their old masters, though, as this album exemplifies the Sodom-ized witching metal power-trio sound this band already worshiped. Though labelled as black metal, Communion eschews relentless blastbeats and nonstop tremolo riffing for a strong old school thrash and heavy metal influence, not unlike Urn’s 666 Megatons or last year’s Bloodlust album. At the same time, the driving rhythms and occasional “epic” flair of the guitars make me hesitate to lump this in with blackened-thrash. Instead, Communion’s 33 minutes sound more like a mix of a supercharged Venom and the more grandiose moments of Deströyer 666. All fans of old school thrash metal, satanic speed metal, and black/thrash alike should check this album out