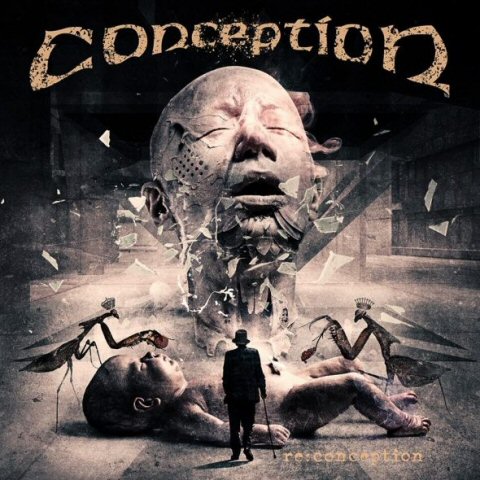 Twenty plus years is a long time. It’s enough time for people to forget thoughts, emotions and endeavours, and move on with new things in life. In music this translates to following new artists, exploring different genres, re-evaluating thoughts on several topics, “growing up”. However, every once in a while there comes a moment that yields a direct link to our past. And whether we’re talking about a strong or a weak link, it’s always up to us to decide the impact it’s going to have on us. And so, here we are. Conception’s single Re:conception is out after 21 years of silence and now we have a first-hand opportunity to experience one of these moments. The band’s fundraiser was a total success and as promised, the work is done and delivered on time. But is it any good? To get straight to the point, Re:conception is what I’ve been waiting and hoping for. It’s a 2-track single, but trust me, everything we loved about this band is there. After a brief intro, “Grand Again” kicks things off and sets the record straight with band’s qualities and history. It’s a very fitting song for a reboot and an overall clever choice: it’s capturing, pompous, groovy, it shifts between edgy verses and a mellow, uplifting chorus, but the best part is the bridge in the middle of the song. The bridge is a travel in time and a throwback to the band’s legendary works. A distinctive moment of lyricism and a showcase of the band’s qualities. Moving on to “Feather Moves”, I’ll start by saying that the title suits the music perfectly. It’s a more mellow tune compared to the opener and, overall, a very dramatic and emotional song. It comes with one of the best choruses I’ve listened in a song of the genre for a long, long time. But again, this shouldn’t come as a surprise given that Conception were amongst the ones that defined the genre back in the 90’s. It’s a song that keeps bringing a two words in my mind: melancholy and introverts. Re:conception marks a victory [and perhaps a redemption] for the band, but at the same time it makes a promise for things to come moving onward. With mr. Østby in charge of the guitars, Roy Khan back in action and Heimdal/Amlien laying the foundations, I’m sure we’re destined for great things. A sheer bliss.