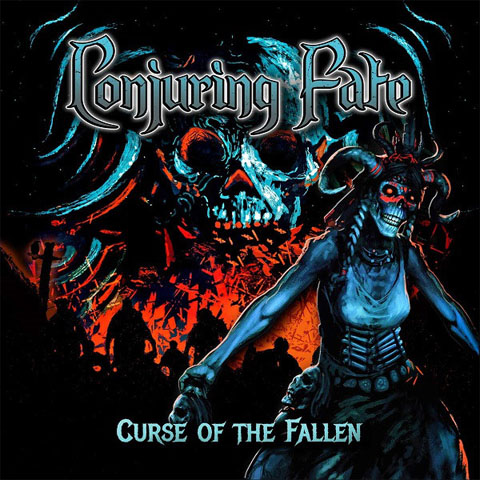 Conjuring Fate were originally formed in 2005 in Belfast, Northern Ireland. It took a while for them to find a constant line-up, so the first live gigs were not played until 2008. Founding member and guitarist Phil Horner is a friend of Sweet Savage’s guitar wizard Simon McBride. Former Sweet Savage drummer Jules Watson played drums for Conjuring Fate from 2011 to 2013. “We all grew up on our daily dose of Maiden and Saxon,” explains Phil Horner what Conjuring Fate are all about musically. “Sound wise we are now situated in between NWOBHM and classic power metal.” Following their 2014 debut EP House On The Haunted Hill and the band’s first full-length album, 2016’s Valley Of Shadows, the 2019 record Curse Of The Fallen is about to up the ante once again. “I believe this album ticks all the boxes,” smiles guitarist Phil Horner when asked about Conjuring Fate’s second album. “We really concentrated on making each song the best it could be. They are heavy, catchy, melodic, shredding twin lead solos, and Tommy has really shone through with a great vocal performance. We really wanted this album to pack a punch! There were so many song ideas going around. For me, I created one cool song musically, then I tried to beat that with each song I did after that. And I believe that worked. This time I mainly concentrated on music, leaving most lyrical themes up to Tommy and Steve.” Along with the mentioned Sweet Savage and bands like Stormzone and thrashers Gama Bomb, Conjuring Fate are an integral part of the up and coming Northern Ireland metal scene. There is not better proof for this than this album.

Track list:
1. The Premonition
2. Burn The Witch
3. Voodoo Wrath
4. Midnight Skies
5. Journeys End
6. Daughter Of The Everglades
7. Night Of The Knives
8. No Escape
9. Children Of The Night
10. Original Sin