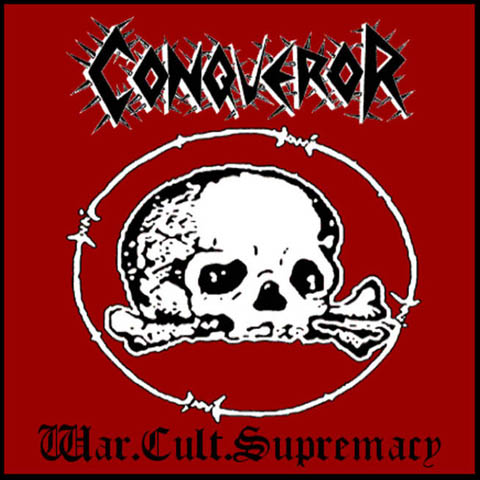 Conqueror began its campaign of devastation in 1992 with the union of the uncontrollable and aggressive drumming of J. Read (Cremation, Revenge, Axis of Advance) and the cacophonous guitar of R. Forster (Domini Inferi, Blasphemy). From this combination came a surge of hatred and violence yet unmatched in extreme metal. After the demo, Antichrist Superiority in which Conqueror sharpened the blades of its tools of war, the band turned its attention to crafting the one of the most cataclysmic and savage Black/Death records ever produced. There are few albums as genre defining as War.Cult.Supremacy. Conqueror’s work may arguably be perceived as representing one of the last major steps forward in the evolution of underground metal. Though it precipitated a flood of weak simulacra, the undeniable power of Conqueror’s sound has never been achieved by any band since. The melding of the instrumentation and imagery evokes an atmosphere of endless extermination. With Conqueror, Read perfected the style of playing for which he is now revered where the reckless attack of the drums are presented as a focal point of the band’s sound rather than a backdrop. The horrific collision of Read’s recalcitrant percussion and vocal mayhem with Forster’s roiling guitar cultivates visions of Armageddon in which the turbid smoke of the burning dead turns the sky a deep, opaque grey and the ground is soft with the dampness of blood. The intervening years have not reduced the effect of Conqueror’s music at all. Indeed, Conqueror’s sound and vision are arguably more relevant now than at the time when they were created. It suits perfectly the apocalyptic nightmare that appears to be perpetually unfolding around us. Existence is conflict and the sound of Conqueror is a mode of combat unto itself. The path toward conquest; the path of the Superion. Rising above the subhuman forms that dwell below, yet eschewing lofty pseudo-intellectual histrionics, Conqueror aggressively confront and operate within the brutal nihilistic reality of the world while simultaneously carving out space for the elite man to transcend through the language of terror and violence. Conqueror’s warfare mysticism seeks out the nexus of arcane esotericism and the savagery of combat. Perhaps an appropriate reference point would be the militaristic sound of Order From Chaos merged with the bestial belligerence of Blasphemy. The effect on the listener produced by this combination is profound; it is neither excessively cerebral nor is it one of pure physicality. The previous versions of this album have generally suffered from a lack of visual input from the band. This version is the first in which the band had complete creative control and features J. Read’s Satanic genocidal propaganda. This double album features all of the recordings Conqueror ever created including the demo and a compilation tracks.