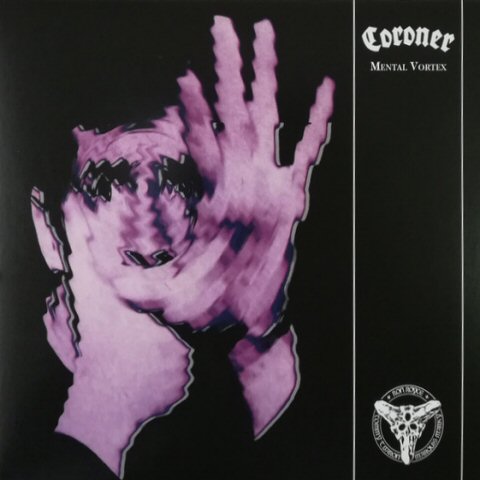 Coroner’s unorthodox approach to thrash metal had been turning heads and opening minds with their every release, and with album number four, 1991’s Mental Vortex, the band arguably reached their creative peak. Widely regarded as their greatest achievement, Mental Vortex was the culmination of three increasingly unique and experimental albums which saw the Swiss trio (much like their early mentors, Celtic Frost) quickly moving away from the everyday trappings of thrash metal into unpredictable avant-thrash territory. In the process, unbridled speed and aggression were replaced by highly technical and unconventional songwriting, so that by this time, only singer Ron Ross’s deathly grunts remotely linked the band to their primitive origins. Indeed, mind-bending excursions like “Divine Step (Conspectu Mortis),” “Sirens,” and “Metamorphosis” defy the boundaries of heavy metal, flirting with jazz and progressive rock in equal measures while rarely approaching offensive levels of self-indulgence, thanks to their tight-knit, focused arrangements. As usual, six-string alchemist Tommy T. Baron leads the way, enriching his already-remarkable repertoire by combining his angular riffs and fluid, inventive lead work in seemingly impossible ways. And their controversial reading of the Beatles’ “I Want You (She’s So Heavy),” which brings the proceedings to a close, remains perhaps the ultimate testament to Coroner’s fearless drive, helping to certify Mental Vortex as an extreme metal landmark.