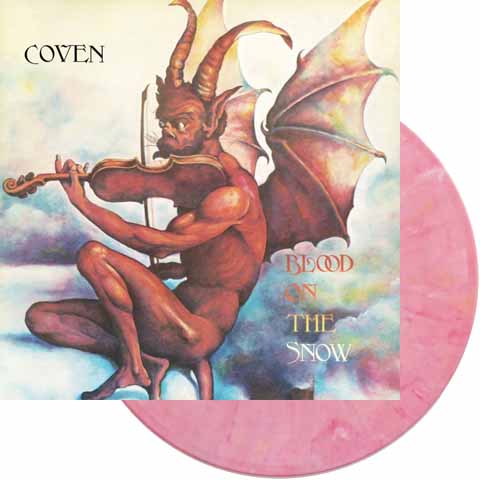 2019 press on Blood on the snow marbled vinyl with gatefold cover. Limited 1200 copies

The third album from the worlds first occult band. The Who producer Shel Talmy crafts the smoothest sound yet for Coven, and this is the style that really could have brought the band over the top, but it’s too much too late. This Song’s For All You Children shimmers with fabulous production and an exquisite Jinx Dawson vocal, even better than on her Dennis Lambert/Brian Potter co-write hit from two years prior to this, One Tin Soldier. Sidney A. Seidenberg, longtime manager of B.B. King, was representing the group at this time, with vocalist Dawson and guitarist Christopher Neilsen having a better handle on the songwriting, a big step forward from 1972’s self-titled Coven release on MGM. Heck, they even sound like Spanky & Our Gang on the sublime Lady O, and that is a quantum leap from the witchcraft and magic eventual Lovecraft member Jim Donlinger brought to their first release in 1969 with his labored songwriting. Indeed, Donlinger left for a band with an even more mystical name, that of fantasy writer H.P. Lovecraft, while under Talmy’s guiding hand strings and orchestration bring the group to a poppy space that suits it very well. The album cover looks like it came out of Creepy or Eerie magazines and there are the obligatory Halloween costume photographs in the gatefold, but songs like Blue Blue Ships and I Need a Hundred of You don’t sound like the comic book episodes from the band’s past. One has to read the lyric sheet to see that Blue Blue Ships is actually a haunting song sung as if Dawson had already passed over. It has ten times the composing skills that Neilsen and Dawson displayed on the previous album’s Shooting Star, the material maturing along with Coven’s musicianship. I Need A Hundred Of You is fun, singer Dawson and guitarist Neilsen collaborating on a song that in future days would be thought of as a song about cloning. It’s a shame Buddah dropped the ball on Coven and artists like Buzzy Linhart, who they recorded and marketed but couldn’t break on the level of Gladys Knight and some of their higher-profile groups. The version of Alan O’Day’s Easy Evil, covered by Lulu, Genya Ravan, Dusty Springfield, and so many others, really fits. Alan Estes, a Tammy Wynette co-writer and percussion player on many recordings, guests on conga drums, helping give this up-tempo version a uniquely fun perspective. Dawson sounds like she’s having a blast, interpreting O’Day’s nugget with more drive than the group’s take on Leiber & Stoller’s Jailhouse Rock from the previous self-titled outing. Blood On The Snow is an album that, if not a financial success, proves that Coven had more talent than the band was ever given credit for, the title track being the one where the group really cuts loose and goes back to its roots with some blazing hard rock. Though it doesn’t contain Coven’s hit single, this is the band’s key recording.