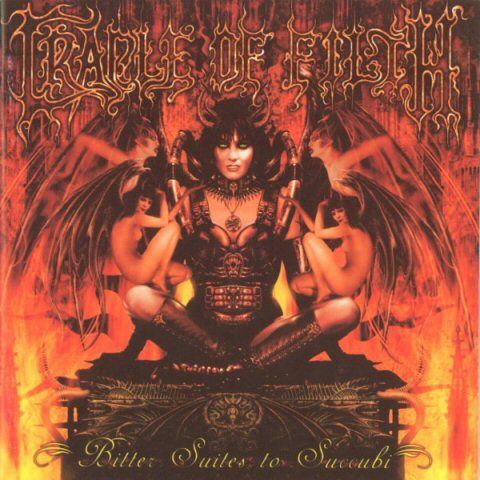 Originally intended to be an EP, Bitter Suites To Succubi found Cradle Of Filth inspired to stretch the release into a beast of full-length proportions. With that in mind, Bitter Suites is, unsurprisingly, a somewhat illogically tossed salad of Cradle Of Filth tracks: four new originals (All Hope in Eclipse, Born in a Burial Gown, Suicide and Other Comforts, and Scorched Earth Erotica) mingle with three re-recordings of The Principle of Evil Made Flesh-era cuts (Summer Dying Fast, The Principle of Evil Made Flesh, and The Black Goddess Rises II), a cover of a Sisters of Mercy tune (No Time to Cry), and two fluffy instrumental tracks. As a whole, the disc is uneven at best, even considering the overall top-shelf quality of the new songs; the re-recorded tracks raise a big question mark (specifically: why?), considering the changes in arrangements are either subtle or nonexistent. Longtime Cradle-ites will want to grab Bitter Suites to Succubi to better understand the band’s compositional growth (if not for the cleverly punned title alone), but truthfully, the album would be listened to more often if it were a solid, hit-and-run EP of new tunes punctuated by the highly enjoyable, suitably blackened Sisters of Mercy ditty. Newly recruited fans are to be directed toward a more coherent entry in the Cradle of Filth catalog, such as Dusk and Her Embrace or Cruelty and the Beast. ‘”Dinner at Deviant’s Palace’ is actually The Lord’s Prayer played backwards.