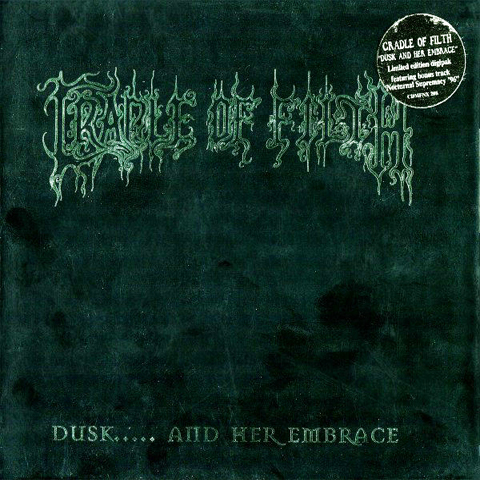 Cradle Of Filth -Dusk And Her Embrace cd

Reduced price due to cover and cd being ex

Black digibook with one bonus track

Cradle of Filth may be one of the only recognizable underground metal acts to an average person. Although mom and dad might not know who they are, the band enjoyed a streak of notoriety through the late ’90s into the turn of the century that would be hard for a music fan to miss. Their theatrical approach to the black metal genre was nothing new, but they turned it up a notch by cutting out much of the humor and bad special effects that groups like Mercyful Fate depended on and replaced them with a creepier, nastier stage show. But unlike so many of the bands in this genre, they had the music to back it up, and Dusk and Her Embrace may be their finest moment. What they did more than any other group is take the extreme playing style of the Norwegian black metal scene and apply a Sisters of Mercy style of melody to the singing. A hundred different metal bands tried to use goth flourishes in their music, but Cradle of Filth realized that you could make goth conform to heavy metal, not the other way around. This results in some creepy material; just listen to “Heaven Torn Asunder” or “Malice Through the Looking Glass” to hear some of the most important black metal ever made. What is even weirder is how catchy this music is. They really do a good job of incorporating memorable vocal lines and melodies into one of the least accessible genres of the 20th century. The keyboard intros and flourishes may be a little much for some listeners, but in the field of gothic European black metal, would you really expect anything less? With catchy songs, a brutal delivery, and a great gimmick, this is as good as underground metal gets. Along with Emperor, Faxed Head, and a few other pioneers, this band really helped the black metal genre to reappear after the death metal craze of the early ’90s, but more than any other group, they also helped to put a twisted, ugly face on the genre for all to see.