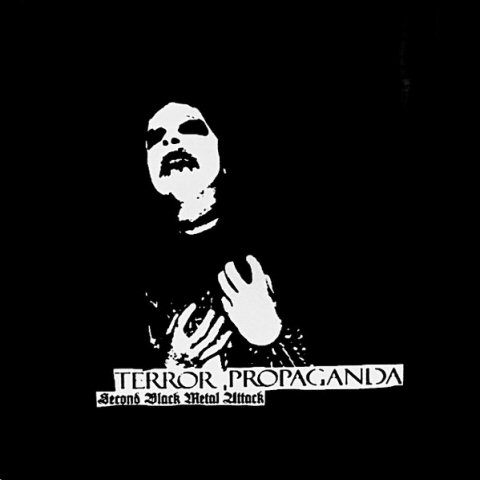 While certainly not offering up anything original in the new school of BM, it’s clear to see that Craft don’t give a fuck. The band’s second album, Terror Propaganda, resonates with plenty of Celtic Frost and Darkthrone influences in all facets: the simple artwork, the attitude, and of course the music. However, we’re not dismissing Craft as a clone or a shit band. Oh, no. Even though these Swedes stick to a beaten-and-true path of black metal, certain things lurk in the mix that set Craft apart in a certain way. Riffs shift between icy tremolo picking, mean-as-fuck power chord bashings, massive sludgefests, and a slice of dissonant, atonal sequences that are often played alone that create a cavernous sense of terror; the latter seem to be highly influenced by a dark ambient style, or maybe even the wave of French BM bands in the mid-90’s. Either way, the guitar work is filthy as hell and represents the true spirit of black metal at work. Craft’s songwriting skills never stagnate, and even the slower Celtic Frost-esque riffs are kept interesting with splices of pinch harmonics. Craft will rip your fucking face off. Not with blaspehemy or speed, but with true black metal spirit.