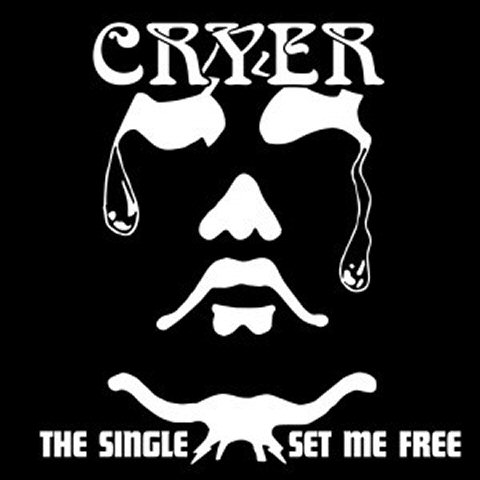 Cryer -The Single/Set Me Free cd

Birmingham act noted for their outrageous stage shows, Cryer created quite a buzz within the British club scene, but their only legacy is one self financed single and an album under an assumed name. In 1980 the band recorded a self financed single, thus taking their place amongst the New Wave Of British Heavy Metal elite. Cryer gigged solidly, backing up the single release by performing headline club tours and support dates to Gillan. The band’s over the top stageshow, featuring exploding polystyrene heads, rocket firing guitars and flame juggling, became something of a talking point on the club circuit. However, things didn’t last and the band split in 1983, however the band had recorded a full length album and the rights to the unreleased album was bought by Heavy Metal Records. Heavy Metal Records didnt like the name Cryer and changed the band name to Force and added an album cover depicting someone’s head being blown off; much to the band’s dismay. Cryer/Force play a keys-driven hard rock with lot’s of 70’s elements and a special AOR touch. Imagine something in-between Saracen, Magnum, Styx, Foreigner etc. and you get a picture of what it’s all about. Absolute killer tracks on the album: Footsteps (epic, imaginary, great time changes), Hesitate (also recorded in the early days when they were called Cryer), Hold on to your love and Don’t throw my love away (both more commercial but still great).