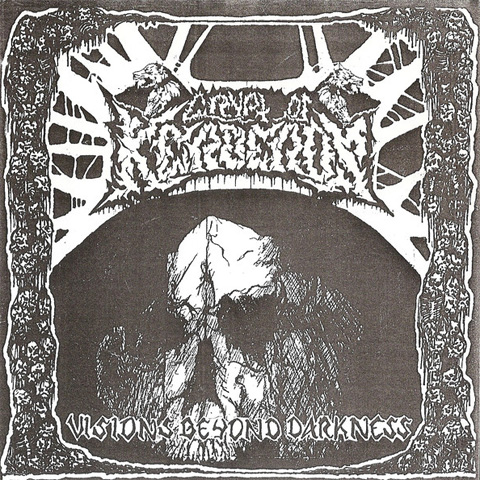 Crypt Of Kerberos ‎–Visions Beyond Darkness 7″

Cover and vinyl is vg+

Eskilstuna Death Metal band founded in 1990 under the original moniker of Macrodex, releasing demos under that title, Disgorged To Carrion in February 1989, Infernal Excess in June 1989 and Remains Of A Lost Life the following year. The group transformed itself into Crypt Of Kerberos and releasing their first vinyl single Visions Beyond Darkness in 1991. Its not the most impressive piece of art but all that would change within a year with their second single Cyclone Of Insanity. So even if it clearly sounds like their very first recordings its still an interesting piece. The two tracks are slow to mid paced and the heavier parts seamlessly venture into the doom territory. The two tracks here sounds influenced by the likes of Bolt Thrower. But the real problem here is the production. Its so primitive, harsch and chaotic more like a rehearsal recording then a studio single. The Visions Beyond Darkness single now has a greater historical value than musical value. So if you’ve never heard the band before then I would recommend checking out their second 7 or the album first.