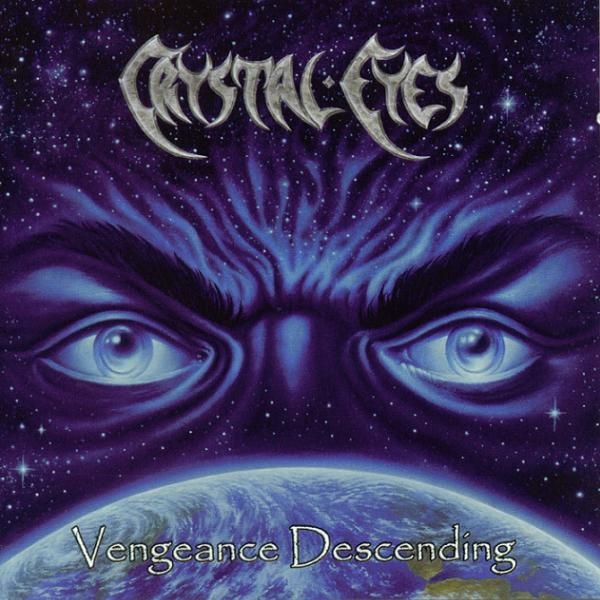 The early days of the long standing yet largely underground Swedish power metal institution known as Crystal Eyes were marked largely by frustration. For those who were versed in metal media circles at the time, Mikael Dahl seemed a bit unhappy with the way the band’s earliest works had been realized, a view that the author of this review disagrees with. Along within this frustration came a move toward so-called greener pastures, thus a new production team was tapped and Dahl himself was involved in the process, resulting in an album that still bears a strong resemblance to the first two from a general standpoint, but a lot of specific points have been altered and a lot of older ideas have been jettisoned, chief among them Dahl’s former fixation with the melodramatic excursions into musical expressionism that typified his sort of avant-garde ballads, unfortunately enough. For a similarly masterful album art toting as it’s predecessor, “Vengeance Descending” proves to be a fairly different beast once dealing with the actual contents. The songwriting is still epic in scope and loaded up with stylistic nods to Helloween and Iron Maiden, but there is a greater degree of rock/metal influences that hint at a greater infusion of Hammerfall and Running Wild influences. This results in a number of songs that go the route of audience and scene praising such as the extremely unsubtle “Child Of Rock” and “Metal Crusade”, a couple of largely mid-tempo bruisers that have a bit more of a bluesy character and hint at what would become the band’s dominant sound come “Dead City Dreaming”. However, the production quality and mixing of the instruments definitely has a familiarity with the 80s character of previous works, though with a greater level of clarity and polish, thus increasing it’s appeal while slightly surrendering a level of its mystique. The general departure from exclusive fantasy based storytelling doesn’t merely find the band utilizing a few metal praising anthems, but encompassed most of this album. The witty speeder “Mr. Failure” with its almost punk rock character and happy tone ranks as one of the more overt eviscerations of uppity rock critics who are dismissive of or at downright enmity with metal music, thus providing a negative reinforcement on the metal praising front. At the same time, greater emphasis is placed on general themes of personal conflict and triumph, particularly coming to a head on the galloping series of melodic wandering “Dream Chaser”, which also features Dahl getting a little bit grittier in his vocal attack while still not quite becoming as dirty and nasally as Kai Hansen. It’s actually a bit interesting how largely mundane lyrics normally reserved to thrash metal bands on one end and Dragonforce on the other can function in a similarly complex musical context to the epic storytelling that was heard on “In Silence They March”. The only two songs on here that really act as throwbacks to Crystal Eyes’ former days of fighting wars with the undead in a bygone age or against alien forces beyond the stars are actually the high points of the album. “The Wizard’s Apprentice” features the vocal handiwork of the famed Lost Horizon vocalist Dan Heiman (who has since sworn off the metal world sadly) and his presence functions in much the same way that Michael Kiske’s did on a few rerecorded songs from the “Helloween” EP, radically changing the dimensions of the arrangement and coming off as slightly closer to the lofty visions that Dahl was convinced he couldn’t reach on his own previously but actually did. One isn’t necessarily better than the other, but they are quite different, and it’s easy to see how many who were not big on this band were taken in by Heiman’s presence since he fit the dramatic vocal persona that became more popular in the early to mid 2000s. “Oblivion In The Visionary World” sees Dahl returning to the epic ballad realm again with even more acoustic guitar mastery, and while the creepy dissonant elements have been removed to reveal a poignant ballad with a lot of atmosphere, it functions quite well, save the goofy 3 minutes of silence followed by a hidden 20-30 second joke polka-like song that wasn’t really necessary nor fitting. For most who have now come to know this band, this is where the career actually began, and it all terminates on Heiman’s presence on one song here and his eventual employment as a full time session vocalist on “Confessions Of The Maker” after the demise of Lost Horizon. It shows a band that, like many others in this style circa 2003, had parted ways with the Sci-Fi/Fantasy lyrical underpinnings of the style in the name of conforming to a growing trend of rock-infused players that entered the scene thanks to albums like the Masterplan debut and Edguy’s “Hellfire Club”, not that it wouldn’t have been a welcome addition to the scene had nearly everybody not jumped onto the bandwagon. I still find myself preferring the previous 2 albums, but this one stands as the strongest since their release, largely because it still has a lot of the same musical characteristics. Guest vocals on “The Beast In Velvet” by Gerd Salewski of Chroming Rose fame.