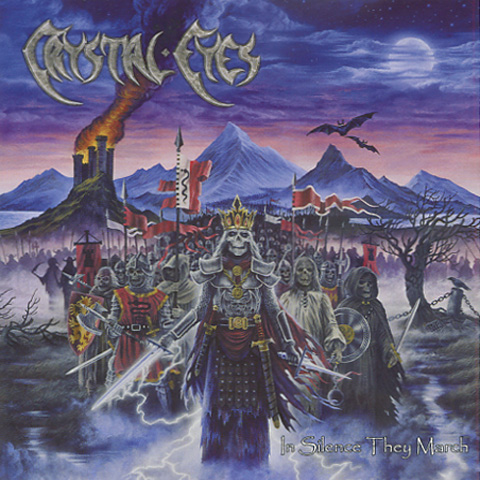 In Silence They March, the second album from the power metal combo Crystal Eyes from Boras, Sweden. This album was recorded at Studio Mohrmann, Bochum (Germany). Melodic Power Metal done right with influences from bands like Iron Maiden, Blind Guardian and others… while still forging their own unique sound. This album contains 12 songs and great tracks include the opener Time Flight, the fast Cursed And Damned and The Grim Reapers Fate in which the guitarist gets real wild. The duelling and galloping guitars of Iron Maiden are reflected in this song. The Grim Reapers Fate is followed by the acoustic track The Undead King filled with Blind Guardian-like atmosphere. The epic title track In Silence They March is my absolute favourite song. This is a typical Power Metal song filled with riding rhythms and dark lyrics in the vein of Blind Guardian. Adrian Blackwood is another fast track with excellent guitar work and power riffs a la Running Wild. The singer has a good voice for this type of music and the chorus will stay in your head for hours. The lyrics are fantasy-oriented and the cover artwork is excellent. The production is much better than on their debut World of Black and Silver and every instrument is heard clearly on every song. This is Melodic Power Metal rooted in the 80’s… fans of Freternia and Power Metal in general will really appreciate this