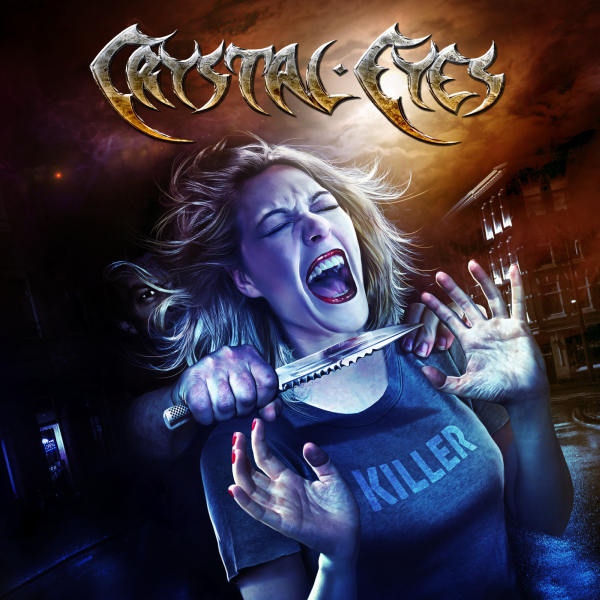 Swedens Crystal Eyes is not a name one usually hears during a discussion about power metal which is a shame since they are quite the diamond on the rough. Forming in 1992 and releasing several demos and a compilation, they released their debut full length in 1999. Jump forward 15 years and were up to the bands seventh full length, Killer. Back on the vocals is their original vocalist as well as guitarist, Mikael Dahl. I actually like this guy’s vocals. He is all over the place sounding like everyone from Atilla Dorn in places to Kai Hansen others to screams that could have been done by Eric Adams, all the while having his very own sound and personality. His return to the mic is a welcome return and has even made a really good album better with his delivery. The songwriting here also must be credited since the songs are well done and catchy with plenty of hooks to keep you interested. Why this band isn’t one of the more well known in their genre is beyond me because this album can stand with any of the more established bands. The title track and album opener is the perfect example of what I’m talking about. Kick ass riffing starts the song off with a killer (seems that the album name is perfect) verse leading to a catchy chorus that reminds me of Gamma Ray a lot. The solo on this song is really good and their is many more on the album that are even better. Warrior is another song that is just catchy as fuck with a verse that is melodic with massive traditional metal riffing leading to a bridge that hooks you in and then they lay an awesome chorus on us. That’s how heavy metal is done. Dahl’s vocal delivery is one of the best on the album here with just an amazing sound and range. The beginning of Hail the Fallen has another vocal delivery that shows that Dahl’s range is a force to be reckoned with. As much as I love Daniel Heiman, I think Dahl fits this band’s music much better. Then we have Forgotten Realms which is a cross between metal ballad and epic metal. The melodies are just infectious on this song and the epic feel of the verses and chorus just adds to the beauty of it. Starting off with some nice clean sounding guitars this song just builds to become an epic monster with massive riffs and a killer solo all without forsaking the melodic hooks. This is, easily, the best song on the album. The Lord of Chaos is a riff fest with more of a speed metal feel. It’s loaded with hooks and melodies but the riffing is what’s impressive the most here. The chorus reminds me of Gamma Ray in a way. The guitar work on this song is actually impressive when you combine the riffs and the solos. The ballad is a staple of traditional/power metal but it seems that even the more established bands have been faltering in that aspect lately. However, I’m happy to say that Crystal Eyes has actually created a power metal ballad that not only can I listen to, but actually like…a lot! Dreamers on Trial is not cheesy or sappy, but instead it’s a ballad that has that metal anthem feel to it. The metal has not been sacrificed as there is plenty of riffs and a solo that gives me goosebumps. This is how the metal ballad is done. Dogs on Holy Ground rounds out the album with a chorus that reminds me of Dogs On Leads by Accept for some reason. As a matter of fact, the riffing on most of this song has an old Accept feel to it making it stand out a bit from the rest of the album. As I said earlier, I do not know why this band is not as well known as their peers because they can deliver an album just as powerful and just as good as any out there, and this album is proof of that. The album is called Killer because it is just that, a killer heavy metal album.