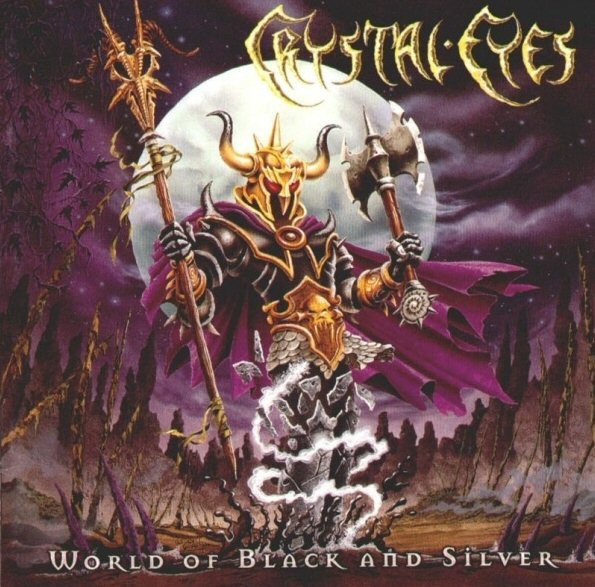 One of the brightest new power metal bands to pop up recently is Crystal Eyes, from Sweden. They blend in pieces of Hammerfall, Gamma Ray, and Running Wild seamlessly with a bit of Yngwie sprinkled over the top and a splash of Blind Guardian in some of the medieval influenced sections. Its a recipe for success, and they are aiming for just that. “World of Black and Silver” is an excellent album being a debut release. Their sound is pretty standard formula, until you start counting the guitar work which is captivating throughout this disk. The riffs and solos splattered all over the tunes are extremely unusual, and very addictive. If there is one thing that stands out in this release, its the outstanding axe slinging. The vocalist is nothing spectacular, being in the same type as Joacim Cains from Hammerfall, but with a slightly deeper voice, better equipped for singing about dragons and kings and all those medieval things convincingly. The rhythm section is fairly tight, and hammers when it needs to. Songs are all well written, with punch, flair, melody and enough progressive type elements to keep them spiced up and interesting. In fact if there’s anything I would count off for, its the lyrics, which, I am sure they did their best, but it comes off as cheesy if you take the words and actually read the verses. However, oddly enough, the way its delivered it gives the illusion of being perfect with shades of brilliance, which shows just how much good music can overpower lyrics in a heartbeat. Too many highlights from the album to mention, but I’ll pick a handful anyway. “Extreme Paranoia” is a frantic speed metal tune that reminds me of Gamma Ray. Haunting through and through is “Victims of the Frozen Hate” with its guitar driven melodies, icy acoustic guitar that sends shivers up the spine, and a very convincing vocal performance. My pick of the album, its not too speedy nor too slow, but instead opts for a pacing inbetween. The solo completely rips, backed up by some slow heavy rhythm guitar work, while the lead guitar shreds all over the place, and the build-up after the solo back into the chorus is suitably dramatic. “Rage of the Sea” features a blistering opening riff that is so Running Wild-like that its nearly scary. The medieval feel it radiates could also have landed it on something similar to the Conan the Barbarian soundtrack. Just another example of the high standards set for axeslinging on this album. Its not your everyday filler riffs and substandard “just because” solos. That short opening riff is slipped in here and there throughout the song to retain that feel achieved at the very beginning. The fading sound of the ocean waves adds an extra atmospheric touch to the ending. “Winds of the Free” is quick and fast like a strong blowing wind. Straightforward and packed with guitar and a great chorus, its just another good song on a great album. The frantic double bass drumwork and fiery guitarwork blast this song wide open. The grand finale for the album, the title track, “World of Black and Silver” is an odd little tune, that truly sounds like it comes out of another universe, or perhaps even from a world of black and silver. Never have I heard acoustic work that is as grabbing as this in a way that it just crawls into the skin, which provides the “silver” feel of the song. While the “black” would definitely be the insane laughter the singer suddenly breaks off into, which is quite unnerving. A mystical trip into a delusional world of insanity, which I have a feeling was inspired by the Crimson Glory song “Lost Reflection”. Crystal Eyes may sound like a mishmash of other favorite power metal bands, but their songs are far from sounding like standard material. They toss in plenty of little extras like, chimes, riffs, samples such as birds singing or the ocean waves, that takes the listener off guard. Many times during the first few runs through the album, I would gasp in surprise over the direction a song would take or the sheer addictiveness of some of their riffs. Its not a common thing for music to be capable of shaking up the listener and going far beyond their current expectations as this album often does. A real gem of a debut release for 1999, if Crystal Eyes is capable of this kind of work now, just wait for their next album, they have the talent to make it big in the power metal world. Keep your eye on this band, they will definitely be moving up in the ranks very shortly.

Track listing:
1. Interstellar War
2. Gods Of The World
3. Winds of The Free
4. The Power Behind The Throne
5. The Dragons Lair
6. Eyes Of The Forest Gloom
7. Rage On The Sea
8. Victims Of The Frozen Hate
9. Extreme Paranoia
10. Glory Ride
11. World Of Black And Silver