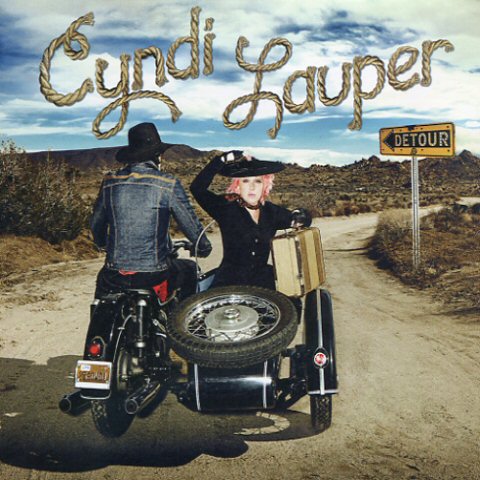 Reduced price due to cover having small clamp marks

A spiritual sequel of sorts to Memphis Blues, Detour finds Cyndi Lauper swapping out blues for country & western. The “western” part of the equation is crucial to Detour, a record equally enamored of cowboy camp as it is of Music City craft and corn. Such a wide purview is testament to Lauper’s taste-savvy show biz sensibilities, but by balancing ballads with riotous romps, she winds up with a bit of a mess on her hands. On their own, the slow-burning-torch set pieces of “End of the World” and “I Fall to Pieces” have their charms — they offer ample evidence of Lauper’s nuance and control, elements that are often underrated — but when paired with the ferocious, mincing wink of “You’re the Reason Our Kids Are Ugly,” “Cowboy Sweetheart,” and “Detour,” the spell is broken. Matters aren’t helped much by the presence of Dolly Parton’s “Hard Candy Christmas” — a fine, faithful rendition that closes off the record on a sweet note –= and the crisp, digital modern sheen of the opener “Funnel of Love,” elements that pull Detour even further down a winding backroad. Such sudden shifts in tone might work better on-stage than they do on record, and with its cavalcade of guest stars, Detour often does play a bit like a stage revue, for better or worse. After all, much of Lauper’s charm lies in her innate theatricality, and when she’s paired with someone who shares her humor — Emmylou Harris on “Detour” and, especially, Vince Gill on “You’re the Reason Our Kids Are Ugly” — there’s a crackling vitality that nevertheless winds up diluting the diva showstoppers, something that could possibly be finessed on-stage but seems like a sharp turn on record. Nevertheless, on a track-by-track level, Detour has a few stumbles — the biggest is “Night Life,” and that’s due to the gravelly growl of Willie Nelson, not Lauper — and if it’s taken as a collection of performances and not a coherent record, it’s fun.

Track list:
1. Funnel Of Love
2. Detour-with Emmylou Harris
3. Misty Blue
4. Walkin After Midnight
5. Heartaches By The Number
6. The End Of The World
7. Night Life-with Willie Nelson
8. Begging To You
9. You’re The Reason Our Kids Are Ugly-with Vince Gill
10. I Fall To Pieces
11. I Want To Be A Cowboy’s Sweetheart-with Jewel
12. Hard Candy Christmas-with Alison Krauss