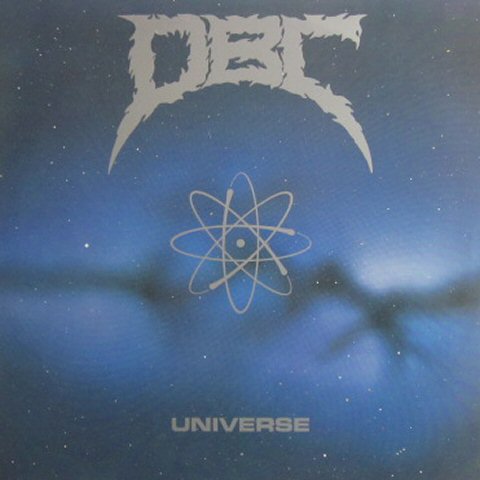 Reduced price due to cover and vinyl being vg+

Montreal’s DBC (Dead Brain Cells) were a thrash/crossover band, who only managed to release two albums in their career, but still left a lasting impression on the scene. After releasing their self-titled Dead Brain Cells of 1987, it was apparent that these musicians felt they were meant for more than aggressive crossover, even if this album was a well put together take on the form. A concept album about the history of the universe from the genesis explosion to the end of the world showed of course an impressing ambition from the band. Universe was then released in 1989 and with a concept idea like this you wouldnt have been surprised if it would have been a two hour double length album complete with symphonic orchestra, operatic backing vocalists, samples ripped from Carl Sagan’s cosmos and endless self-indulgent prog riffs. But thats not the case with DBC’s release. Instead we are given just over half an hour of competent progressive thrash riffs, neatly tied together by leads, solos, and tempo changes sometimes calling to mind Voivod of the same era. The vocals, crafted to fit the sci-fi theme and imagery of this album, are essentially a set of robotic spoken word passages describing the development of our universe to the rise of humanity. The unusual keys and time signatures are a challenge for any vocalist, and they must have decided that a punky shout would not do justice to this music. Phil Dakin was clearly not up to the task of singing tunes to this complex music, so a compromise was reached in the form of talking. The problem with this album, is that when these musicians were playing fast, aggressive crossover, their precision and competence led an urgency and undeniable lure to their take on this otherwise primitive music. For crossover, it was extremely well written, and yes, even proggy at times, something of a milestone considering that crossover sits well within the group of subcultures noted for their anti-prog sensibilities. So when they turned their attention to prog proper, the music falls short of what other artists were achieving in the late 1980s. It is not so much that if you treat this album as a crossover album it suddenly becomes good, the music does not let you. One cannot deny their ambition, and their competence does carry them a long way to achieving what they set out to do. But concept albums are a risky game. They tend to set the artists up for failure before the writing process has even begun. DBC did not need to double the length of this album , embellish the complexity, and indulge in neoclassical flourishes in order to do justice to their subject matter. Rather, the fact that these musicians decided to turn their attentions to writing about the history of all of space and time may have distracted them from creating well-crafted prog-thrash, which is what their first album hinted at. Despite all this criticism, DBC’s two offerings remain forgotten classics that are well worth the time of any fan of 1980s thrash, or heavy metal in general for that matter. DBC probably released this album prematurely, and it is a shame they split up shortly after its release, I would be curious to see how this music would have developed. It remains a fun outing in imaginative thrash metal that is well worth your time. It is an affliction of musicians once they reach a certain level of competency, when it morphs into virtuosity, they occasionally forget to write the music. The result is music for musicians, an exploration in talent and mathematics, rather than artistic depth and intellectualism. Having said that, ‘Universe’ remains an imaginative album that is well worth your time. Some of the members also played in the hardcore band S.C.U.M.