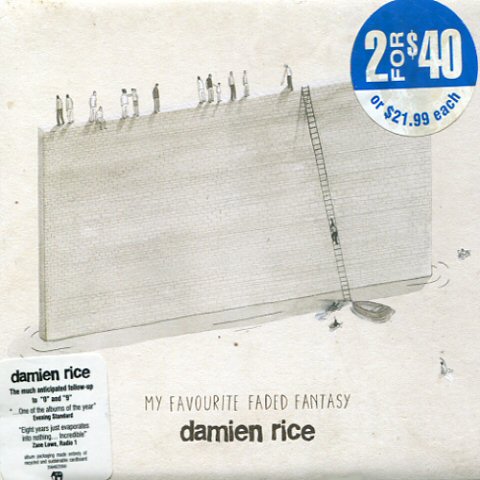 Reduced price due to price sticker on front

Damien Rice doesn’t do anything in a hurry. He lets his songs unfold at a deliberate, almost stately pace and he’s similarly unconcerned about rushing through his career, taking a full eight years to deliver 2014’s My Favourite Faded Fantasy, which amounts to only his third record in 12 years. Other artists who have experienced a similarly long gestation period return with long, overblown works, but not Rice. He teamed with Rick Rubin, the Zen master of acoustic basics, to shape an exquisitely textured collection of eight songs that runs just a hair over 50 minutes (a simultaneously released deluxe edition contains just one bonus cut). Rice doesn’t greatly expand his aesthetic — he’s still equal parts Jeff Buckley and Thom Yorke, cut with the sullen singer/songwriter sophistication of Nick Drake — but refinement is Rice’s signature. He whittles away the excess in his words and melody, then dresses the detailed sculpture in finely tailored accoutrements of slightly sighing strings, strummed guitars, and a hint of forward momentum lying within buried rhythms. This means My Favourite Faded Fantasy may come on as a bit underwhelming at first but that’s the intent: it’s not designed to grab, it’s designed to soothe and then slowly worm its way into the subconscious, which is where these eight songs reveal themselves to be as strong as anything else Rice has written.