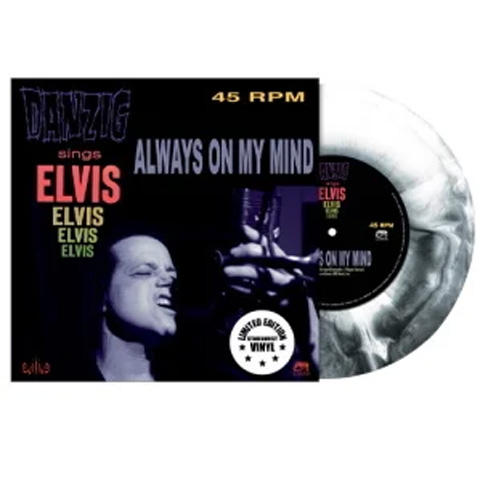 Danzig -Always On My Mind 7″ [starburst]

2020 studio single from punk/metal icon and powerhouse vocalist Glenn Danzig paying tribute to his idol and inspiration, Elvis Presley. This single features Danzig’s unforgettable version of Always On My Mind plus an extra thrilling treat in the form of an unreleased alternate vocal version of the powerful ballad Loving Arms on the B-side. Released on different colored vinyls Danzig had this to say about the release: I always wanted to do leopard print vinyl as no one to my knowledge has ever done it before. I showed a mock-up to Brian [Perera] at Cleopatra and he loved it, so we went with it. Needless to say, we’re both happy that fans are digging it as they’re selling out very quickly. Regarding how Danzig Sings Elvis came together, Danzig said: What happened was, in between doing it, I’ve been working on a million other things. I’m working on other records. It started out as, I’m gonna do a Danzig Sings Elvis EP, and it can be four or five songs. And eventually, while doing other records, we’d have downtime and I’d just turn to Tommy [Victor, guitarist] and say, Let’s do another Elvis track or two. He’s like, Okay. Eventually, it became an album.