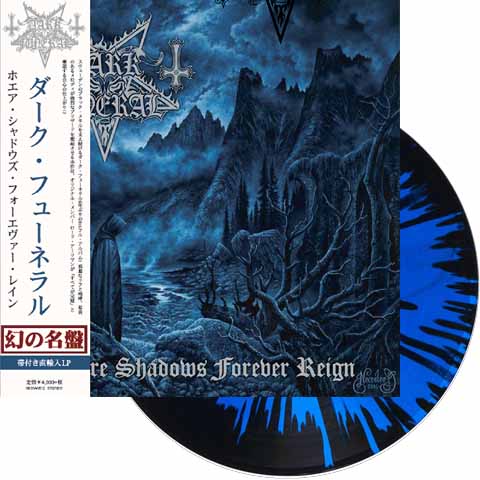 Much like Behexen, Dark Funeral have been at this whole black metal thing for some time. Not sure if “pioneer” is appropriate for these Swedish tremolo-crafters, but they are influential. Their approach is straightforward, their black metal is classic, and their releases consistent. Where Shadows Forever Reign is the sixth studio album from the old school quartet. Though there are some line-up changes since last time (Lord Ahriman being the only consistent member since the start) the most obvious is that the band has changed vocalist to Heljarmadr of Curse 13 and its one of the best choices they ever made. If you’ve heard of little known black metal acts Grá and Cursed 13, you already know Heljarmadr. For those unfamiliar, Grá reaches into atmospheric black metal while Cursed 13 cranks out some good ole black ‘n roll. The former is moody and the latter is stupid fun. And, as it turns out, I prefer Heljarmadr’s solo work to his work in Dark Funeral. Heljarmadr is a capable substitute for Broberg and Where Shadows Forever Reign is an album that throws its horns back to the blossoming 90s scene with love. And while a lot of fans will like that, after all, the true cult will stand for no evolution in sound, and will tolerate nothing that hasn’t been recorded on aluminium foil. So in the end its pretty much your own choice how much you love the old stuff. Where Shadows Forever Reign might be the call back you might have been looking for. There’s plenty of bands trying to emulate the the sound of the era, but the authenticity is oft merely imitation. Though I can see how someone would see that approach in Dark Funeral. There isn’t a single aspect of this album you haven’t already heard done somewhere else, or by the band themselves. And for someone looking for a breath of fresh air, look elsewhere. Dark Funeral stay on that shadowy, left hand path, marching onwards towards destruction.

Track list:
1. Unchain My Soul
2. As One We Shall Conquer
3. Beast Above Man
4. As I Ascend
5. Temple Of Ahriman
6. The Eternal Eclipse
7. To Carve Another Wound
8. Nail Them To The Cross
9. Where Shadows Forever Reign