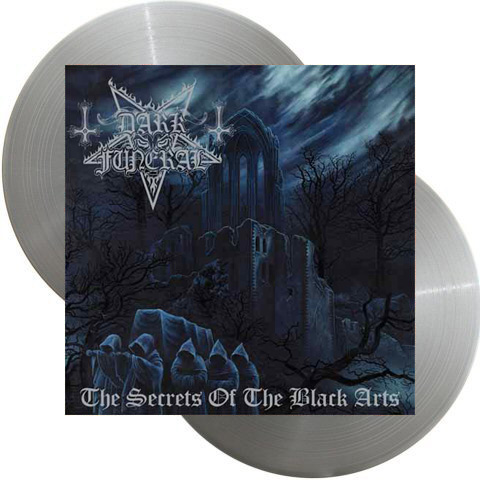 Dark Funeral -The Secrets Of The Black Arts dlp [silver]

2010 press on Back On Black Records with 8 bonus tracks. Double album on silver/grey vinyls

Inspired by their older colleagues Marduk, Dark Funeral were founded in 1993 but didn’t release their debut album until 1997. With time, they would have become one of the most popular Black Metal bands in the circuit, but at the time of their debut album The Secrets Of The Black Arts they were virtually unknown. The style presented here is traditional Black Metal in D tuning which features constant tremolo-picking, elementary but semitone-tending harmonies, sophisticated drumming and a general feel of derivatives in the definitive overview. However, the band here were exploring chords and tragic moods where most artists were starting to repeat themselves. There aren’t exactly Symphonic ambitions here: instead, the mood is involuntarily solitary, also due to the production. The songs are fully formed and extremely refined, a rarity for a debut album but common for a band who had started for a few years like this: the album starts to change mood near the end. With time, the band would have had their high and lows, without losing however the consistence that has accompanied them for so long: this is a good starting point nonetheless. This album was originally recorded at Dan Swanos Unisound Studios but the band never liked the sound so they re-recorded the album with Peter Tagtgren in The Abyss. This album features 8 bonus tracks from the original Unisound recording as bonus