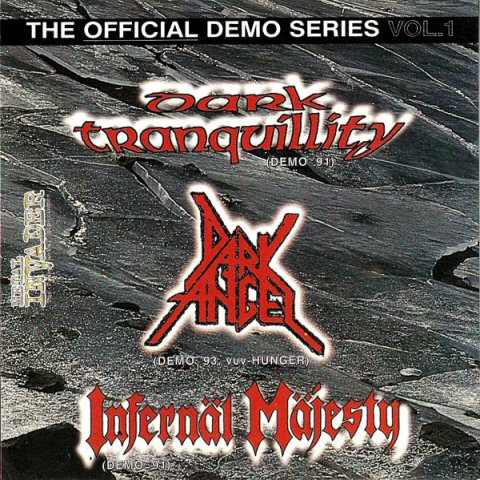 Reduced price due to cd being vg+

This promo sampler features three rare demo tracks. Out first is the Trail Of Life Decayed demo from 1991 by Dark Tranquillity. This was the earliest manifestation under the band name Dark Tranquillity. This demo is an ode to the thrash and death metal juggernauts at the time, which bands like this and In Flames were mere mice against. There worship comes in the form of unpolished, menacingly evil sacrifices in four tracks. The really class comes from the leadwork during interludes and solo bridges: adoring classical influences, melodic channels, medieval synths, all coarsely produced to give off that distinct retro sound. If I were to hear this demo back in 1991, I’d give these guys kudos for a pretty enjoyable demo. It isn’t essential to have, but if you are a fan of the band then it’s kind of a treat to check it out and see how they played before they got big. Out next comes the Hunger demo from 1994 with the Californa band Hunger, Hunger was a short lived project that Ron Rinehart and Eric Meyer formed after Dark Angel broke up. This demo was the only thing the band ever released. If you like Dark Angel then you will find this one interesting too. Vancouvers Infernäl Mäjesty finish this compilation with their 1991 Creation Of Chaos demo. By this time the band had a new vocalist, new drummer and new bass player. The demo includes a new version of “Into The Unknown,” along with “Power Intrusion,” “What’s What,” and “Those About to Die”. With 60% of the members replaced, the band’s sound nevertheless didn’t change too drastically, except that the vocals here seem a bit more growly than before. These final four songs serves as an excellent glimpse into the history of a band whose contributions to each of the genres they touched should be widely celebrated.