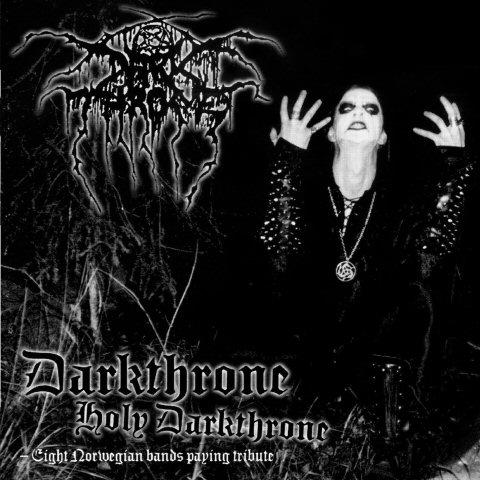 Darkthrone Holy Darkthrone is a tribute album to the Norwegian black metal band Darkthrone, with contributions from other leading Norwegian black metal bands. Satyricon opens this album with Kathaarian Life Code from A Blaze In The Northern Sky. If you cannot do anything else than just copy the track, then let it be. This is a super track, but I think Satyr’s industrial approach to the vocals doesn’t give this track justice. Enslaved on the other hand, with Grutle’s harshness, does justice to Natassja In Eternal Sleep from the mighty Under A Funeral Moon. However, it is still not a necessary track since the song remains the same, only without the coldness from the original version. Then Thorns must be credited for destroying the Darkthrone song. The Pagan Winter from A Blaze is a great ending to that album, but Thorns’ industrial approach is a sure hate/love track. In my case it’s a hate track, but kudos for making something totally different. Emperor’s take on Cromlech from Soulside Journey is a bit different as well. Death metal with black metal sound and vocals! And it works. This is one of two highlights on this tribute. Ihsahn’s vocals and the Emperor sound doing Darkthrone. Oh, the irony. Which isn’t ironic in this case. It actually makes sense. Dodheimsgard improve Green Cave Float from the Goatlord album. You know the supposed to be second full-length album, released later on in Darkthrone’s discography with those horrible vocals. Dodheimgard’s version makes sense, even though it’s not a highlight. The song is simply not good enough and the guitars are kind of too thin on this version but still and improvement from the original one. Gehenna does not improve Transilvanian Hunger from the same titled masterpiece. However, they do their own version, adding a one minute intro the track. The great thing about this song is the vocals. They are insane. And Gehenna manages to keep up with the utter darkness from the original version. Ugly sound, ugly music, but still great of course. It’s Darkthrone dressed up in Gehenna. That keyboard effect throughout the track is great as well. It makes an insane song even weirder. The sound on Gorgoroth’s version of Slottet I Det Fjerne is not good at all. The vocals suck big time. Is this the best they could do? The sound on Immortal’s take on To Walk The Infernal Fields is worse than on their first demo. Thinking of how Immortal sound today, it is refreshing to hear that they once were an underground black metal band. This version is more fun than anything else. That’s not the intention, I’m sure, but it’s fun. And sad