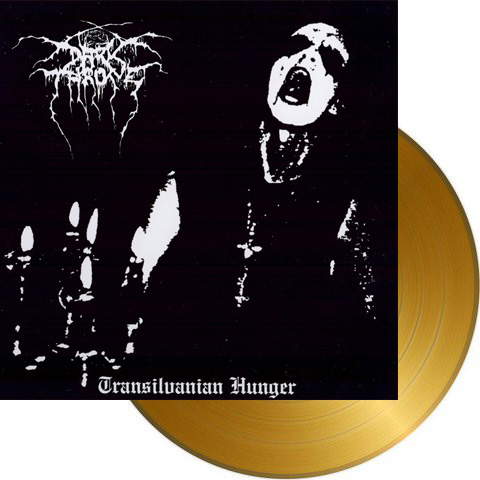 Darkthrone are mostly known for their triptych (a work of art divided in 3 sections) of A Blaze In The Northern Sky, Under A Funeral Moon and, finally, Transilvanian Hunger. These three albums represent the pinnacle of their black metal work. Later albums just aren’t as grim or as black even though they still are great for the most part. Transilvanian Hunger is the last of these three godly black metal albums and, in many opinions, the greatest. One aspect this album is famous for in black metal circles is its completely awful production. I say awful not in a negative sense but in a sense that compares this to the vast majority of artists who try to make their music sound…well recorded. Here Fenriz and Nocturno decided to produce their fourth studio album in a way that makes it sound about as grim, raw and generally evil as possible. As much as I personally consider good production a good thing, I am forced to say that many extremely well-produced black metal bands out there just don’t sound evil at all. Most of these are symphonic bands such as Dimmu Borgir or Cradle of Filth but also some “tr00” bands like Immortal and newer Darkthrone. In any case, the production here fits the music perfectly. This is as raw as it can get. Musically we have raw and simplistic black metal played by what is undeniably one of the best black metal bands ever. Fenriz’s drumming is extremely simplistic and in the background, as should be for any good black metal. One interesting aspect here is that even though this is raw as fuck, the riffs are quite melodic in nature. Not to mention well-played, even if they are quite repetitive: there are only two riffs on the title track. That’s 6:09 in length. And these two riffs manage to create on of the greatest black metal tracks ever done by anyone. One thing that’s made this album considerably more infamous is the nature of some of the statements on the back cover. First of all is the statement made by Fenriz about the album’s quality which was to be printed on the back cover but was refused by their label: ‘We would like to state that Transilvanian Hunger stands beyond any criticism. If any man should attempt to criticize this LP, he should be thoroughly patronized for his obviously Jewish behavior.’ Obviously, as we live in a completely fucked up society dominated by political correctness up everyone’s ass, this was seen as racist by their label Peaceville and they made a huge fuss over nothing, leading to Darkthrone’s signing onto Moonfog Productions 2005, when they’ve returned to Peaceville. The second statement that sparked controversy was the Norsk Arisk Black Metal (Norwegian Aryan Black Metal) written on the back cover in very large print, under True Norwegian Black Metal. These four words made it into early prints of the album but were censored from the recent digipack version. Again, everyone’s mass hysteria about something being politically incorrect caused a huge crisis with the band having been accused of being National Socialists by the lovable Norwegian media and then having to made a statement as to which they are not a political band. Of course the word Aryan (simply meaning White, Caucasian) has been almost banned in the world since 1945 as a symbol of the evil of whites being proud of their heritage and culture. Transivanian Hunger is Darkthrone’s best effort ever and one of the greatest black metal albums written. This is perfect when considering its musical genre and has absolutely no flaws to it. This is essential to everyone who claims to love black metal and is sincere about it. One must really have something wrong going on in his/her brain in order to claim this is bad while pretending to be a black metal fan. This IS black metal in its purest, unaltered form.