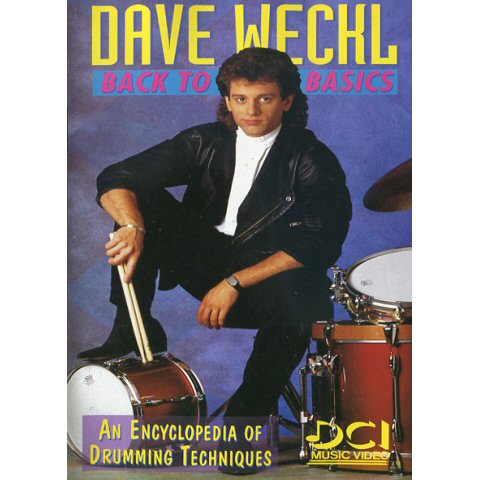 DCI Music Video was founded in 1982 with the idea of documenting the contributions of great musicians incorporating in those years the emerging phenomenon of home video VHS with musical instruction. One of their releases was Back To Basic with Dave Weckl. Dave Weckl is one of fusion’s most acclaimed drummers, making his name during a six-year-stint with Chick Corea. Weckl was born in St. Louis and grew up listening to soul and jazz; he received his first drum set at age eight and developed his playing by listening to drummers like Buddy Rich, as well as R&B grooves. He majored in jazz at the University of Bridgeport, but left after two years to become involved in the New York jazz scene, also touring Europe with various bands. Weckl joined a fusion group called Nitesprite, where he attracted the attention of drummer Peter Erskine; Erskine helped him get a gig with French Toast. From French Toast, Weckl branched out into session work, playing on numerous albums, Diana Ross, Madonna, and Robert Plant to name a few. Then seven years with Chick Corea, solo albums, instructional videos, more session work, GRP-All Star Big Band, The Dave Weckl Band, Brecker Brothers Band Reunion, The Musician and more session works. Dave Weckl is simply one hell of a busy drummer