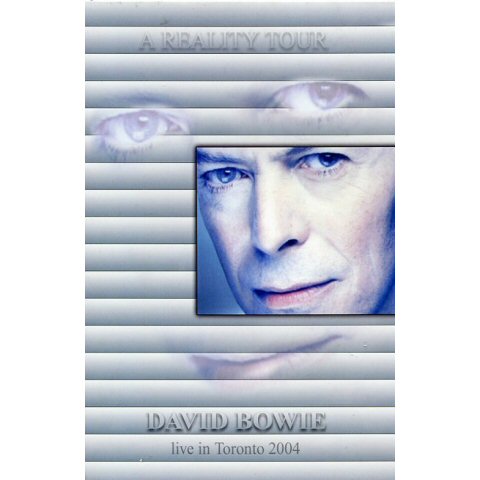 Back in 1990, a forward-looking David Bowie vowed to blow out his old songbook one last live time with the hit-laden Sound Plus Vision tour. A decade-and-a-half later, the erstwhile thin white duke seems to have come to terms with the fact that, collectively, his back catalogue remains bigger than he ever was, or is ever likely to be again. Accordingly, the set list for Bowies ongoing Reality Tour, this dvd features an excellent audience recording from the Air Canada Centre in Toronto, Canada on the 1st of April 2004, relies heavily on the shape-shifting, genre-melding artists material of yore. While Bowie has trotted out the oldies on occasion since 1990, those efforts to mine the velvet goldmine haven’t been nearly as extensive as they are this time out. In fact, were it not for the tours moniker, even those particularly devoted fans in attendance could have been forgiven for being unaware that Bowie had a new disc in the offering. But whereas Sound Plus Vision was effectively a greatest hits tour, this latest trek presents more of a best of package, as curate by someone well versed in the deeper, slightly more obscure recesses of Bowie’s musical oeuvre. Sure, there was plenty to satisfy meat and potato fans (like show-opener Rebel Rebel and Lets Dance tracks Modern Love and China Girl, but even the fat guy dressed up like the wizard from Labyrinth must have been at least a little surprised and delighted to hear Dave turn in a rare rendition of the Hunky Dory epic Quicksand, or re-establish his claim to All the Young Dudes and the Queen co-written Under Pressure. A glossed-up version of the Pixies Cactus served as another of the set’s higher points of interest, along with at least half of the tracks from Rise And Fall Of Ziggy Stardust. In stark contrast to the pretence of that era, though, this was Bowie at his most casual and relaxed, sharing laughs with the audience and carrying on between songs. That backyard barbecue vibe, compounded with an undeniably uplifting set by show-opening happy cult the Polyphonic Spree, and a ubiquitous curtain of pot smoke, helped to deliver the feel-good concert experience of the year.