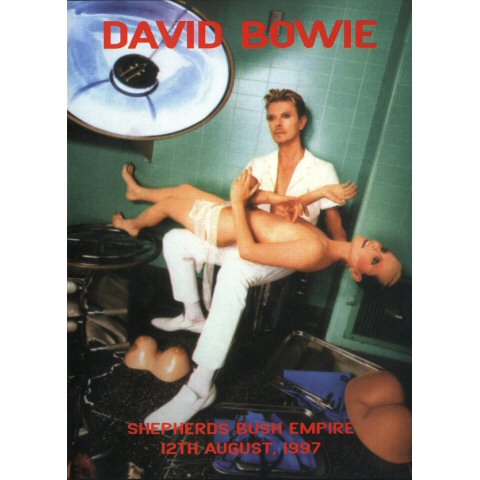 Reduced price due to some marks on the dvd

Wow, this was something that felt like an impossible dream. Seeing David Bowie up close in a small venue. With the release of Earthling he decided to tour more than normal and he performed two nights at Shepherds Bush Empire in London (on the 11th and 12th of August 1997. This dvd being recorded the second night). Bowie had come through a dodgy period post the Glass Spider /Tin Machine debacles and he seemed more confident than years. He’d embraced drum and bass and laced his recent albums with its rhythms. To deliver these he’d got a superb band together and he’s mixing the classics with the recent stuff. At Shepherds Bush the crowd went mad as he walked on alone with an acoustic guitar and performed some Hunky Dory classics: Quicksand and Queen Bitch. Over twenty five years old but he delivered them as if they were new releases. His voice unchanged and from 10m or so he looked great for a 50 year old. There is a blues version of Jean Genie and a percussive take on The Man Who Sold The World, where almost nothing of the original backing survives beside the guitar riff re-popularised by Nirvana. It’s a stellar first segment and he almost maintains it through a couple of Earthlings numbers. The reception is slightly more subdued but that’s inevitable given that the older numbers are lazered on the brain of most of the audience. Reeves Grabels electronic guitar is astonishing for its range of synthesised sound. Far removed from Bowie’s earlier partner, Mick Ronson. Fame and Stay burn up the place but its Under Pressure with Gail Ann Dorsey playing that distinctive bass line and singing Freddie Mercury’s lines that steals the show. Bowie and her seem to have a close rapport and she looks great too. Halfway through the final number of the main set, the electro-drum and bass of Little Wonder, a pair of gigantic eyeball balloons are rolled out over the crowd. As they billow and goggle towards the balconies, the colours of the irises become clear in the strobe lighting. One blue, one green, they are the trademark changeling eyes of David. The giant eyes stare down at the crowd, then roll back up towards the singer and he’s off. He returns for an ageless Moonage Daydream and a grand finale of White Light/White Heat, O Spuerman, Look Back In Anger and All The Young Dudes. Bowie seems to have reached that exalted position of being able to deliver interesting new work that his crowd will listen to as well as delivering the classics with joy and verve. Can he sustain it without the wrong footing he’s made in the previous decade.