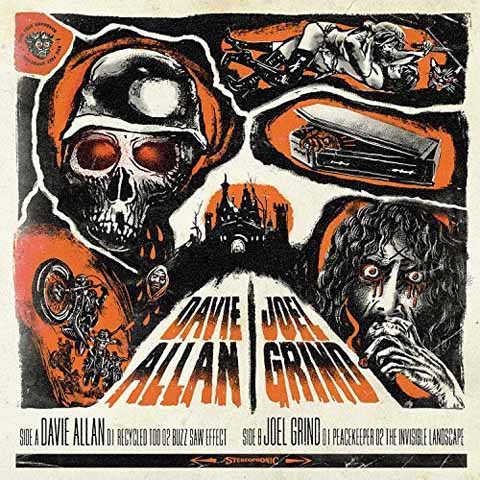 It’s probably more than cliche to talk about unlikely collaborations in the musical world like it’s an indicator of some kind of guarantee of a genius product, but it’s a tag that’s hard to shake. I’ve always found it strange, however, that this usually applies to some kind of hip-hop/rock combo (Anthrax/Public Enemy, Run DMC/Aerosmith) that people are amazed by, but really, how is it unlikely that aggressive, urban lyrics spat over aggressive, rhythmic thrashing guitar would turn out a kickass song that would cause people to happily jump up and down with their shirts off in a sweaty moshpit? Lou Reed and Metallica might be a more suitable description of an unlikely collaboration…if the album didn’t suck. That live pairing up of Elton John and Eminem? Meh. Oh, the Judgement Night soundtrack…but then, we’re back to that rap/rock thing. One definitely interesting team-up to come about in 2016 when an old favourite, Davie Allan, regarded as the founding father of instrumental fuzz-guitar biker flick soundtracks, and Joel Grind, the mastermind behind Oregon’s thrash metal band Toxic Holocaust. As Joel tells it: “This record was an idea I had after being inspired by some old biker movie music, which turned out to be the music of Davie Allan. This lead to me getting in contact with him and proposing the idea of a split, which to my surprise he was into”. Make no mistake…Davie Allan is here, and we know that as soon as the opening track starts up with the sound of a motorcycle firing up. Cue the fuzz guitar, distorted beyond belief, and Allan is into Recyled Too, which seems very recycled; it’s got more than a passing similarity to Blues Theme, his song from 1966’s The Wild Angels. Purists will no doubt be impressed with Allan’s commitment to his signature sound without wavering into anything uncharted, but as an opener, it’s somewhat weak. Track 2, Buzz Saw Effect, fares much better than Recycled, getting off to a solid start with some fuzzed-out Duane Eddy-style tremolo dips before the backbeat kicks in, a steady drumbeat that’s only missing handclaps in its retro-ness. Allan layers his signature chops on top of this simply effective framework, putting down some aggressively rhythmic lead work. Make no mistake, there’s a good bit of repetition going on here as well, but it doesn’t get boring; Allan switches up the patterns enough and throws in a few surprises to keep it interesting. Allan has a lot to say about this Buzz Saw Effect, and he lets the fuzz do the talking. Despite a less-than-impressive opening, Allan’s two songs on this split are far from disappointing, and fans of his work with The Arrows will no doubt be glad to hear the sound of motorcycles and germanium transistors once again.Then we have the tracks Joel Grind made and truth is that I was expecting double-kick drums, noise-gated high-speed thrash licks, but Grind makes his mark immediately with Peacekeeper, a track that sounds as exciting as Davie Allan’s music did the first time I heard it. Sure, it’s more metal than one would expect from this genre, with chugging guitars and lead work that would be more comfortable on Metallica’s Kill ’em All than a Beach Boys record. But Grind has foregone the Boss Heavy Metal pedal and gone straight for the fuzz, giving the guitar tone that ripping cloth sound that Link Wray would be proud of. It’s on The Invisible Landscape, however, the album closer and easily the best track found here, that Grind really impresses. With some ridiculously amazing opening lead work reminiscent of Dick Dale’s clean, reverb-laden sound (think Del-Tones “The Victor”), Landscape doesn’t spare the horses as the drums kick in, rollicking along in double-time without being speed-metally, which brings us into the first break….heavy, but again, the emphasis is on fuzz and not chunk…and then back out again, going even faster. Grind’s lead picking is more than impressive, it’s downright mind-blowing, and he leads The Invisible Landscape through the paces like a car taking a sharp corner on two wheels before finding the road again and barreling into the straightaway. My only complaint? At 2:12, it’s way too damn short, but a mighty fine way to close the project out. Fans of this genre will no doubt be pleased to hear the unmistakable Davie Allan put his signature fuzzy cycle soundtrack guitar onto a couple of new tracks, and hey, how about that Joel Grind kid? I’m not sure how Toxic Holocaust fans will react to this material, but damn, it sure would be something to hear him crank out a whole album of instrumental surf tracks. No disrespect to Allan, but the Joel Grind tracks are worth the price of admission.