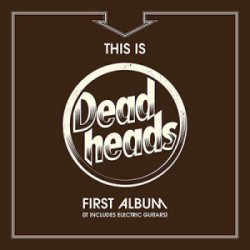 Nobody rocks harder then the Swedes at the moment! Enter: The Deadheads. Not a Grateful Dead tribute band (as one could have easily imagined), not even goth rockers (like Beastmilk). Just a mighty fine rock n roll outfit in the tradition of Gluecifer, Turbonegro and the Hellacopters (mixed with a bit of classic rock). Hell, it’s really hard to put the Deadheads into a box. We usually joke around and say we play Boogie Punk, but it’s okay to call it rock, punk, punk rock, energetic rock, action rock or something else, explains guitarist/singer Manne Olander. We are inspired by many different kinds of music/bands. Of course, old punk is a big part of it. Bands like New Bomb Turks, Dead Boys, Dead Moon, Radio Birdman, Stooges, GG Allin and Ramones have given us a lot as well as a lot of other different genres. Hell, I could namedrop metal bands, soul-artists and other heroes for hours. We listen to so much music and I guess that you somehow learn from the best of it. We do love metal in many shapes but we wouldn’t call Deadheads metal. But you know, some say that Motorhead is heavy metal and some say that they play punk. We don’t think it matters. It’s great and that’s the whole point. The Deadheads formed in the lovely city of Gothenburg in 2011. They issued three 7” singles on Ghost Highway Records from Spain as well as a further two singles on Strange Magic Records (USA). All singles are deleted but you can find songs like Live On, Freak Out, Lose My Mind or Deadheads on their debut This Is Deadheads First Album (It Includes Electric Guitars). The title is of course a pun on an old Howlin Wolf album. Manne Olander (vocals, guitar) Tim Ferm (drums) Rickard Hellgren (guitars) and Sigge Palmén Unger (bass) do indeed have a sense of humour. Our ambition is to play fast forward, energetic rock n roll with soulful vocals and great guitar riffs, summarizes Manne the Deadheads main goal. We see ourselves mainly as a live band and want to keep that energy in the studio as well. All instruments are recorded together live in the studio, except for vocals and some of the guitar solos. We are soon going back to the studio to record the rest of our next album, which is by the way going to be even more kick ass with even more electric guitars! All in all, the ten songs on This Is Deadheads First Album (It Includes Electric Guitars) are quite versatile. The Deadheads show a lot of variety for a simple reason: We try to separate the songs from each other so it doesn’t sound as if we play the same song for ten tracks. Of course, there are fast songs, slow songs and mid-tempo songs but there’s a common thread through the whole album and that’s the most important thing. For example, I do love the band Venom, I listen to them a lot. The song My Demons is inspired by Venom, if you listen to the riff. But if we had to choose, we are more into punk, so Gluecifer and Turbonegro. We opened up for Turbonegro a few weeks back and it was like a teenage dream came true ha, ha.
This Is Deadheads First Album (It Includes Electric Guitars) saw a limited release in Spain on vinyl last year. As a result Ben Klein from Metal Hammer Germany voted it among his Top 10 albums of 2014. Yup, that’s true, pretty good for an album that hasn’t even been officially released in Germany as yet, don’t you think? muses Manne Olander.