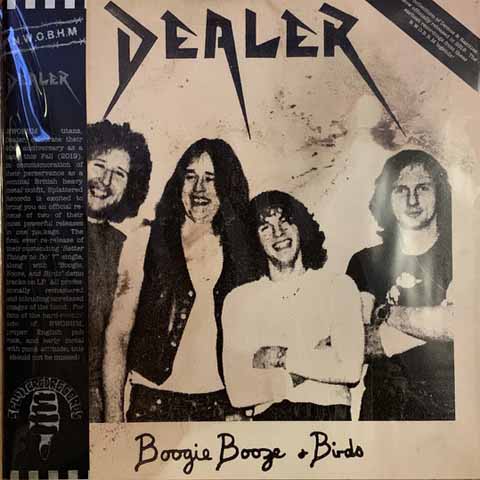 Cirencester, Gloucestershire New Wave Of British Heavy Metal band Dealer was rooted in the 1978 formed Axe Victims. The band evolved into Lone Wolf. However, due to the formation of a London based act of the same title, fronted by the high profile figure of ex-Iron Maiden singer Paul Dianno, the further revised title of Dealer was struck upon. The band released the Better Things To Do single in 1983 (limited to 1000 copies) followed by a three track demo in 1984 before signing a deal with Ebony records where they released their one and only album called First Strike in 1986. Towards the end of the ’80’s, the band disbanded and not too much was heard of them since. This album includes some of the earliest demos the band ever did as well as a replic of the original vinyl single. Singer/guitarist Trevor Short says; We always tried hard to get a good demo and spent a lot of time doing them. Ebony gave us five days to record and mix ‘First Strike’ and to be honest we weren’t happy with the album’. Trevor Short: ‘The N.W.O.B.H.M. didn’t exist when we started out. We just wanted to play heavy metal (as we knew it). It was more a matter of timing, we got labeled as N.W.O.B.H.M. coz we were British and played heavy metal. Don’t get me wrong, it was good for us and we certainly didn’t mind. But we just did what we did and we liked dressing up.’