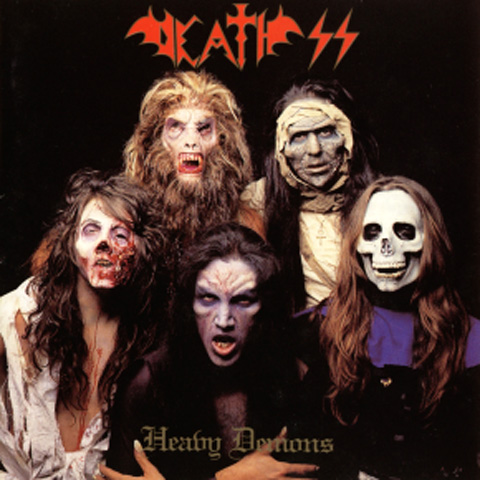 Death SS were formed in 1977 and they can be considered the very first horror metal band. And two years after their second album ‘Black Mass’ they returned with their third album ‘Heavy Demons’. An album that follows, more or less, the same traces of their works before. In this case too, we can say that they recorded another excellent album, full of the main characteristics of the band. The line-up is the same one, except for the new, very good drummer Ross Lukather. The production in this new effort is clearer than in the previous albums, being also more powerful but a bit less evil, losing some of the gloomiest atmospheres. But, anyway, do not worry! They are always Death SS with their style. Their main influences are always horror, speed and classic metal, atmosphere, violence, occult. The album opens with ‘Where Have You Gone’ a great song. All the influences create a good mix here and Steve Sylvester’s voice is very powerful. Tracks like ‘Baphomet’ and ‘Inquisitor’ have both great riffs supported by words in Latin and the atmosphere here is even darker. The clean chorus creates a strange, ritualistic sound and the solos are always in the right place, with the same beautiful sound. ‘Heavy Demons’ is the second excellent in a row for Death SS. With the release of Heavy Demons it seemed like it also was time to try to sell the band outside of Italy, thats why they tride out the German producer Sven Conquest, who did a lot of work for Noise Records. However the European distributors rejected the band thinking they were associated with the contemporary neo-nazi movement. Steve was forced to rebaptize the band, Sylvester’s Death to avoid any possible connection, and under this moniker they issued the live album The Cursed Concert that suspends the recording activity of the band in 1992.