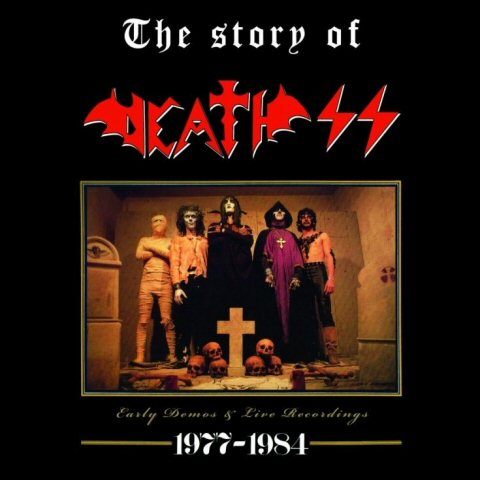 Double album featuring both The Story of Death SS and The Horned God Of The Witches albums which means you will get 25 tracks recorded by the first line up of the band. Classic material

Before Death SS, Italian cult presided in much of the movies, and in avant-garde surreal progressive rock (with highlights such as Jacula/Antonius Rex and Goblin). And until Death SS came about, highly influenced by acts such as Alice Cooper and Black Widow, no bands were playing heavy metal in Italy, much less in the satanic sort of way in which Death SS do. This album is a compilation of Death SS’s early works, and the tracks vary immensely in style. In songs such as ‘Murder Angels’ and ‘Inquisitor’ you see a speed metal side, which is really quite remarkable considering that the time they wrote some of these songs were before 1980. The doom tracks are ‘Terror’, ‘Chains Of Death’, ‘The Bones And The Grave’ and ‘Black And Violet’. Guitarist Paul Chain who played a great role in the writing of this stuff later left Death SS due to a change of heart religiously and his music continued in this sort of vein, whereas Death SS continued more or less in the same vein (all styles) until the album ‘Heavy Demons’ where they changed much of their style. ‘Violet Overture’ is an organ driven interlude much akin to the work of Charles Tiring who did the organ work for Jacula, and also the work of Gene Moore (Carnival Of Souls). Since so many styles are played here, many of the songs might be hit and miss with some. Definitely for fans of early black metal, heavy metal, and traditional doom.