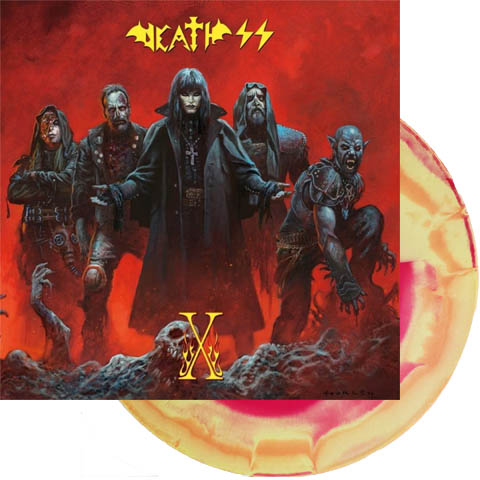 Death SS mainman and legendary iconoclast Steve Sylvester has been doing his thing in the Italian underground for almost 45 years now. In the 70s and 80s, Sylvester played elemental proto-doom with a hybrid of theatrical shock and genuinely unsettling atmospherics, becoming a cult hero in the process. A few short hiatuses aside, he’s kept at it ever since, releasing new music under the Death SS name on a shockingly regular basis. That music has shape shifted a few times over the years, and the 2021 Death SS material is a distant, horror-obsessed cousin of industrial metal. And what has Steve Sylvester to say about the bands tenth album, the aptly named X/Ten. Its an evolution. The spirit and concept behind our project has always remained the same as it was in our beginnings. Obviously, however, over the years we have evolved our sound, always enriching it with new nuances and musical experiences. It would have been very sterile artistically to always remain anchored to the exact same sound. For me, the important thing for an artist is to grow every time, always keeping your own personal style but without ever having to repeat the exact same formula over and over again….