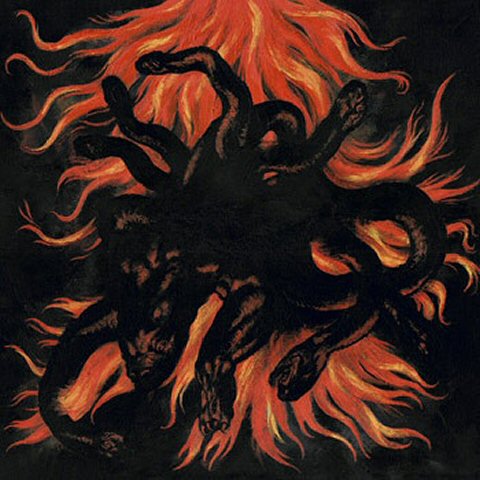 Seek out any depot of French black metal culture and chatter, and you are likely to encounter either lavish praises or unexplained ire shovelled upon the name Deathspell Omega, one of the front runners if not the front runner in that nation’s smorgasboard of calculated extremity. Since abandoning their by the numbers, rustic black metal endeavours in the earlier 21st century, the band have released a pair of divisive and intense exercises in the genre, slowly developing a dissonant, unique style through both Si Monumentum Requires, Circumspice (2004) and Fas – Ite, Maledicti, in Ignem Aeternum (2007) that strains at the threshold of simply framed categorization. So the question is, should we be looking forward with them? Should we be rubbing that lamp and hoping our wishes will bear fruit? You bet you’re fucking hinds we should. Deathspell Omega is one of those rare cases in which the actual ability not only matches the hype, but surpasses it, and Paracletus is another harrowing testament to progression against all odds. For the French band, this is not particularly novel, since their previous album was a spike of scintillating chaos being thrust repeatedly through the listener’s cortex, a dark theological indictment, a reckless aural nightmare that either lifted you into its vortex and buffeted you with its dragon wings, or left you behind in the mud, scratching your temples in consternation. Yes, Fas was really that good. Paracletus, which actually takes a similar aesthetic and twists it into something mildly more accessible, though no less ambitious, is also that good, and it’s by far one of the best spins on the genre that the creative mind has incurred all year. You can still expect the raving lunatic compositions, scaling up and down the fretboard with an infusion of discordant, rampant chord work that will both stun and fascinate as you work out their belligerence. “Wings of Predation”, “Abscission”, “Phosphene” and “Malconfort” each channel their respective whirlwind manifestations into intriguing, Escher-like suppositions, anchored by the sickening, almost jazzy drumming that rides alongside each of the myriad riffs. But there’s something more to the album than mere chaos, a certain degree of calm that claims not only a portion of the album to itself (i.e. “Dearth” or the whipping, post-everything beauty of the closer “Apokatastasis Pantôn”), but also creeps its way into the more intense compositions. Fear not that Deathspell Omega have abandoned the flighty furies that possessed them through the past decade, because this album still spits razors far and wide, but there is a certain curtain of mastery that has been lifted, a dust of spun silk and melancholy that has alighted upon the creators.

In every other category, Paracletus is also fully engaging. This is not just thinking man’s metal in its audio impact, but blasphemous poetry given bold new flesh. As usual, Deathspell Omega’s lyrics are hypnotic in their doctrine, gorgeous and harsh in their meter, and I had just as much fun reading them as I did listening to the music. Streams of unforgettable imagery are hurled into the explorer’s face faster in a single song than most bands can manage across entire albums. Across entire discographies. I felt like Alex from Clockwork Orange, decommissioned to Christ as he was deconditioned to violence through a film cycle. Paracletus is a dystopia born in the decline of divinity, a taunting serpent of the abyss, and it’s got no real weakness aside from being so good that you’ll hate yourself after. It’s fucking overload. And it’s raping your mind.