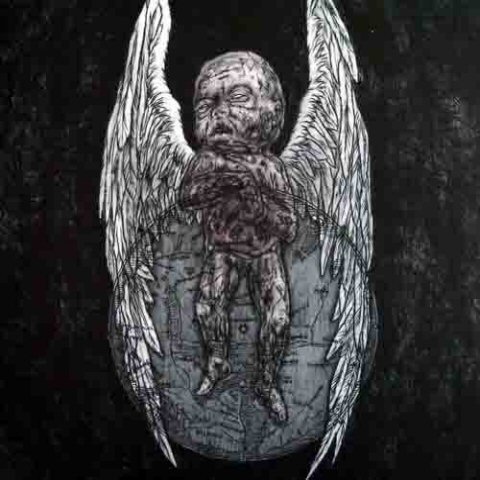 After releasing two very much old school black metal releases, the legendary French band Deathspell Omega decided to change things up a bit (even though past interviews state anyone meddling with the black metal sound should be killed.) The result was ‘Si Monumentum Requires Circumspice ‘, an avant-garde release if you will. The album opens up with one of three ‘prayers’. These prayers are essentially interludes and aren’t songs per se, but they go beyond a simple break between songs. Each one develops itself as it goes on and has its own vibe. These prayers divide the album up into sections. Each section includes three songs including the prayer, with the fourth section beginning with ‘Carnal Malefactor’. Its evident that Deathspell Omega have put a lot of effort into this release and its a very massive album. The guitar work here is good; it gives a very psychotic feel, with many insane fast riffs and some really good melodies (for instance in Sola Fide I and Carnal Malefactor), The bass never sticks out too much but it’s there, Drums are played very good with enough variation to give the songs diversity and power. Vocals are very good as well; deep, dark growls that fits the dark production of this album great. This is a work of art in the academic sense: it can mean many things to many people, and takes on significant power as a singular composition of tone and voice, as a work of music, as a specific orchestration of a larger composition, and as a work of aesthetic emotional expression but its at the same time not easy to listen to, and it will with its 77 minutes slowly tear you apart. But for the devoted listener its highly recommended. The question is: ‘Are you eager to devour a complex work of dark musical art worthy of many repeat listening?’. The album title is Latin for ‘If You Seek His Monument, Look Around You’.