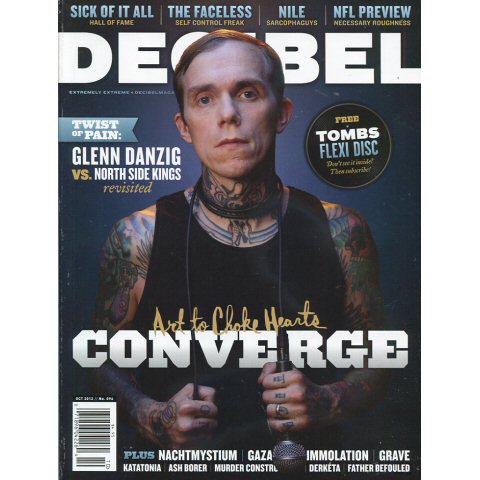 Includes a flexi disc with Tombs

Decibel is a monthly heavy metal magazine published by the Philadelphia-based Red Flag Media since October 2004. Its sections include Upfront, Features, Reviews, Guest Columns and the Decibel Hall of Fame, which pays tribute to a significant album in the history of heavy metal music. The magazine’s tag-line is currently “Extremely Extreme” (previously “The New Noise”). In November 2010, the magazine announced the launch of the monthly Decibel Flexi Series. Beginning with the January 2011 issue (#75), the magazine now includes a limited vinyl flexi disc bound into the magazine each month available exclusively to its subscribers.

This issue has 114 pages written in English and features articles or interviews with or about North Side Kings Vs Glenn Danzig, Converge, Nachtmystium, Katatonia, Immolation, Grave, Gaza, Nile, Denial Of God, Derketa as well as reviews and other news