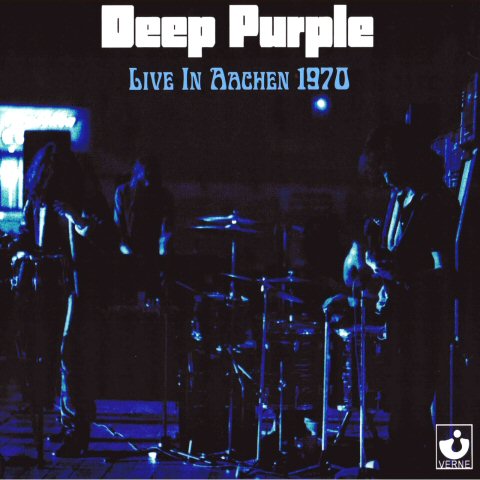 Recorded live in Aachen, Germany in July 1970 when Deep Purple’s album “In Rock” was the hottest album in the land and everyone knew they were the band to see live. Basically what we have here is a taping from the second half of the concert, which meant their lead singer Ian Gillan disappeared for the most part, because it was time to emphasize the instrumental side of Deep Purple. There are only three tracks here, but they are lengthy, with Mandrake Root being over thirty minutes long. If you are into Deep Purple with heavy emphasis on instrumental, you are in for the ride of your life. Keyboardist Jon Lord is the main star here, but Blackmore isn’t far behind and also drummer Ian Paice is on fire, including a good drum solo, which coming from somebody who gets bored with drum solos, so that`s saying a lot. The album opens with their instrumental “Wring That Neck”, stretched out to a 20 minute version that includes lots of solos and jams. They tease out recognizable melodies such as “Hall of the Mountain King”, “Jingle Bells”, and a jazzy “Three Blind Mice”, disguised on rock instruments. Vocals were scarce that evening, perhaps because Ian Gillan was suffering from a sore throat. When he actually sings on Black Night then it sounds as if he’s singing into a tin can. Though most everything else is well recorded enough, the vocals are very rough and tumble. Half an hour of “Mandrake Root” awaits, one of the longest versions known. Ian spends a lot of it screaming, but when it’s jam time you can hear him on the congas. The first half of the jam is loose but at least structured. Lord considered this his best keyboard work that had been captured so far. Interestingly, part of this jam resembles a future song called “Highway Star”. Then, the second half descends into pure madness. Atonal noise, feedback and electric pain dominate these 10 minutes. It is an endurance challenge to be sure. This version of Mandrake Root really feels like a strange mad dark Fellini dream