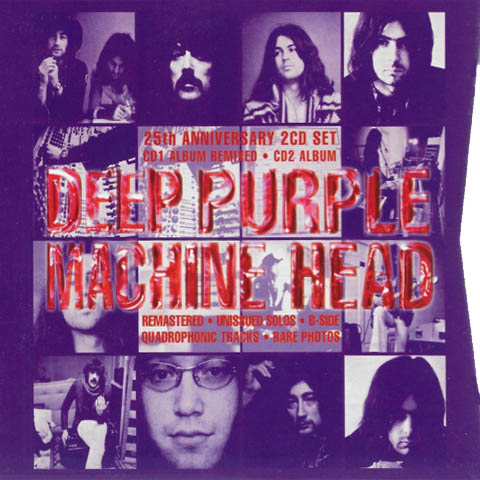 Rare EMI Swindon press of this 25th anniversary edition that comes with a bonus slipcase. So two slicpases and two cds

In 1997, Deep Purple bassist Roger Glover remixed this classic album and that can be heard here on the first disc while the second disc includes the original 1972 version together with single b-side, rara quad versions and a 28 page booklet. Led Zeppelin’s fourth album, Black Sabbath’s Paranoid, and Deep Purple’s Machine Head have stood the test of time as the Holy Trinity of English hard rock and heavy metal, serving as the fundamental blueprints followed by virtually every heavy rock & roll band since the early ’70s. And, though it is probably the least celebrated of the three, Machine Head contains the “mother of all guitar riffs” — and one of the first learned by every beginning guitarist — in “Smoke on the Water.” Inspired by real life events in Montreux, Switzerland, where Deep Purple were recording the album when the Grand Hotel was burned to the ground during a Frank Zappa concert, neither the song, nor its timeless riff, should need any further description. However, Machine Head was anything but a one-trick pony, introducing the bona fide classic opener “Highway Star,” which epitomized all of Deep Purple’s intensity and versatility while featuring perhaps the greatest soloing duel ever between guitarist Ritchie Blackmore and organist Jon Lord. Also in top form was singer Ian Gillan, who crooned and exploded with amazing power and range throughout to establish himself once and for all as one of the finest voices of his generation, bar none. His presence was certainly missed on the album’s requisite instrumental, “Lazy,” but the track would nonetheless evolve and expand into an incredible live jam for the band in years to come. Yes, the plodding shuffle of “Maybe I’m a Leo” shows some signs of age, but punchy singles “Pictures of Home” and “Never Before” remain as vital as ever, displaying Purple at their melodic best. And finally, the spectacular “Space Truckin'” drove Machine Head home with yet another tremendous Blackmore riff, providing a fitting conclusion to one of the essential hard rock albums of all time.