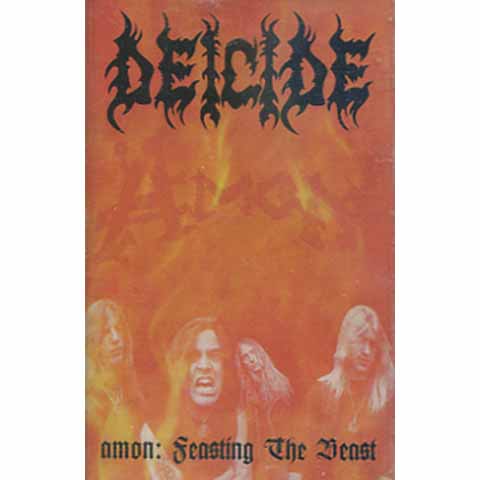 Amon with Glen Benton, Steve Asheim and Eric and Brian Hoffman released two demos Feasting The Beast in 1987 and Sacrificial in 1989. After the recording of Sacrificial they changed their name to Deicide. Roadrunner Records forced them to do that because there was a song called Amon Belongs To Them on the King Diamond album, Conspiracy. The Hoffman brothers started using the Amon name again in 2007, a few years after being kicked out of Deicide. The split created an almost hilariously bad blood between the Hoffmans and Deicide frontman Glen Benton, to the point where death threats have been exchanged, and rumours of the attempted murder of Benton by the hands of one of the brothers surfaced, apparently all due to Benton owning the rights to Deicide. Amon: Feasting The Beast features these two pre-Deicide demos and one thing that can be said about Deicide: they mean what they’re saying. Outspoken Satanist and bandleader Glen Benton’s vocals on Amon: Feasting the Beast emit a palpable conviction that’s rare in metal, and music in general. Even without knowledge of the musician’s many conflicts with Christians, or his hatred for God in general, the wrath and terror he exudes on record comes across as being very real. This is no showbiz put on — it’s the real thing. As unnerving as that might strike some people, there’s a certain frivolousness associated with extreme music that this conviction strips away, making Deicide a much more noteworthy (and perhaps worthwhile) act. It’s hard to say that so much venom necessarily makes for good music, but it is definitely what fans of this kind of music (generally considered death metal, although Deicide fervently renounces this or any categorization) are looking for. Things are at their scariest on Crucifixiation and the angular Day of Darkness, but there isn’t a song included that’s anything short of relentless. Amon: Feasting the Beast doesn’t rank among the best Deicide offerings, however, the record adheres to the group’s high standard of heaviness.