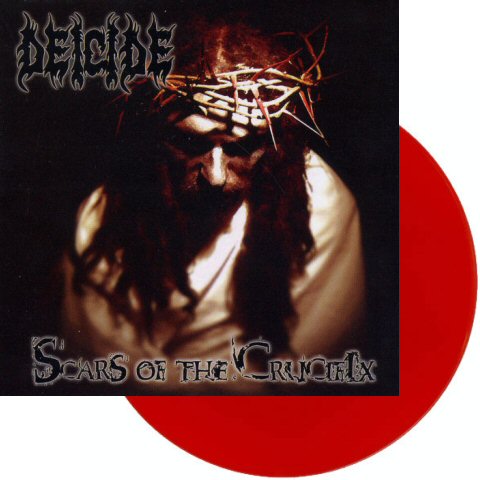 Deicide’s first album for Earache is a short (about 27 minutes) blast of old-fashioned death metal. Cleanly produced by Neil Kernon (Cannibal Corpse, Queensrÿche), the band sounds appropriately brutal with synchronized dual-guitar shredding by Eric Hoffman and Brian Hoffman (who also manage about 17 solos between the two of them), metronomic drumming by Steve Asheim, and Glen Benton’s bass guitar and deep growl (sometimes double-tracked with higher-pitched vocals). In case there was any doubt that the group’s religious views have mellowed, there’s a song on this album called “Fuck Your God.” The title reflects both the level of their rage and the depth of their lyrics; they mostly just spew vitriol at the same general target they’ve been attacking for over a decade (sample lyric from “Mad at God,” which is a different song: “The light of God has turned to sh*t”). For what it’s worth, they still seem to take their religion shtick seriously. Depending on your perspective, that makes them sincere, offensive, provocative, simpleminded, unintentionally humorous, or good showmen.

Track listing:
1. Scars Of The Crucifix
2. Mad At God
3. Conquered By Sodom
4. When Heaven Burns
5. Fuck Your God
6. Darkness Come
7. Enchanted Nightmare
8. Go Now Your Lord Is Dead
9. The Pentecostal