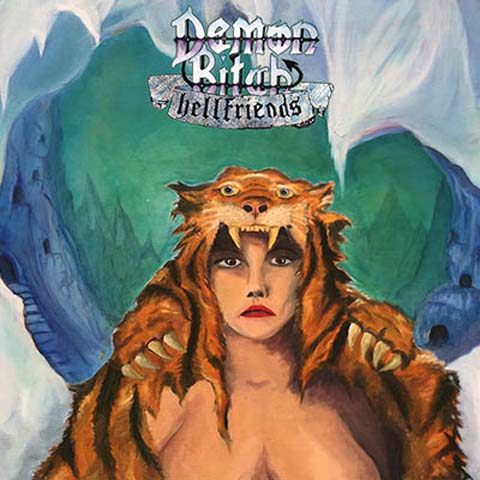 Demon Bitch is a traditional heavy speed metal band based out of Detroit Michigan, USA, with a taste for the strange and obscure realms of the genre. The history of the band dates back to 2011, when long-time friends Mars Weston (guitar), Logon Saton (vocals), and Samuel Ceckowski (drums) came forth to cement their breed of heavy metal with their self-titled 3-song demo, which was released in 2012. The line-up was promptly solidified with the integral addition of a second guitarist, Solon Saton and bass player Navin R. Drebinson. The bands debut album Hellfriends was released in 2016. Vocally, a song like Warning From The Skies from the album bears traces of Queen Of The Reich era Queensryche. Is that comparison wide off the mark? According to the band’s vocalist, this does not seem to be the case: That is a great album. A lot of people also mention John Arch from Fates Warning and Harry Conklin of Satan’s Host and Jag Panzer. All very flattering comparisons and very inspirational vocalists, however, I’ve never intentionally channelled any of these guys through our music, but if that’s what comes to mind when people hear Demon Bitch, then I say cool! I’ve also always been really inspired by the vocalist on Angel Witch’s Screamin And Bleedin and Frontal Assault albums as well, very powerful stuff. When listening to Demon Bitch, very early Warlord also comes into the equation. Omen as well. Are Demon Bitch playing raw, complex, Epic/Speed Metal? Or how would Logon Saton rather describe his band’s individual style? I know our drummer will love that Warlord comparison. Such a cool band Our over-the-top pacing at times might suggest speed metal, but you’re correct, we do love the more flavourful and dramatic Epic Heavy Metal like the bands you mentioned as well.

Track list:
1. Warning From The Skies
2. Devil Love
3. A Passage To The Other Side
4. Beneath The Ice Caves
5. Hellfriends
6. Fortunes Told
7. The Microdome