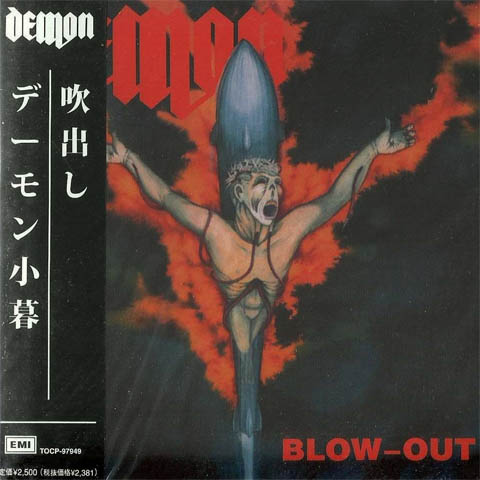 Demon was one of those acts that came through in the NWOBHM movement with both some melody and some ghoulish theatrics to make a name of themselves. After brilliant albums like Night Of The Demon (1981), The Unexpected Guest (1982) and The Plague (1983) it seemed like the world was loosing interested in the band for some odd unknown reasons. When the band released Blow-Out in 1992 it seemed like it only was a handful of devoted NWOBHM connoisseurs who still were waiting for a new album. The band had showed a more anthem-like, less progressive side on the Hold On To The Dream album in 1991 and on Blow-Out the bandn really wanted to keep the old school flame alive throughout the hostile 90s.The album opens with Still Worth Fighting For, a classic power/speed track with Dave Hill’s emblematic soulful passionate voice.The band abandoning their progressive AOR infatuations replacing them with boisterous dynamic tunes, the characteristic memorable sing-along choruses marking every composition. Blow-Out was a good album that saw the band continuing churning out odes to all things classic in metal but it wasnt the music that matter, in the early 90s it was a different musical landscape and very few were genuinely interested in this kind of music. The band took the decision to go on a 10-year long break before re-emerging at the dawn of the new millennium.

Track list:
1. Still Worth Fighting For
2. Everything Has Changed
3. Visions Of The Future
4. Tell Me What You’re Looking For
5. Stop The Fire
6. Crazy Town
7. Victim Of His Time
8. Million Dollar Ride
9. War Games
10. Soldier Of Fortune
11. Visions Of The Future II
12. Sacred Heart
13. Tell Me What You’re Looking For-keyboard mix
14. War Games-big organ mix
15. Stop The Fire-keyboard mix