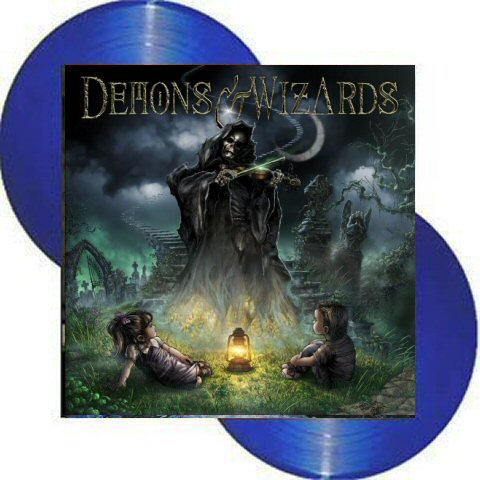 2019 press on blue vinyls with gatefold cover and one side lazer etched. Limited 300 copies

Originally released throughout Europe in 1999, this Blind Guardian/Iced Earth side project made it to American record stores a year later. Considering the lineage of Demons & Wizards, this Steamhammer/SPV offering is an automatic must-own for fans of latter-day European power metal. All-star membership certainly doesn’t ensure a quality recording, but the duo of guitarist Jon Schaffer (Iced Earth) and vocalist Hansi Kursch (Blind Guardian) does deliver a first-rate product on this, their eponymous debut. The music is sharp and punchy power metal, and Kursch’s voice is in excellent form, but the utter predictability of Demons & Wizards may disappoint fans curious about the possibilities of a Kursch/Schaffer collaboration. Every song would fit nicely on a Blind Guardian or Iced Earth outing. Demons & Wizards could disappoint listeners expecting a fresh take on power metal from two of the genre’s more successful practitioners