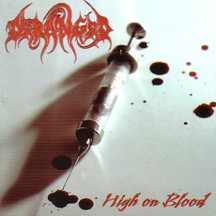 The first time you listen to this album you will be blown away by their brutal approach, expecting something much more melodic from a Swedish metal act. The opening track, Razor Divine, displays the bands incredibly sick vocals, heavy bass and crushing blast beats. Humanity Feeds On Filth sounds basically the same as the previous track, only with a different vocal pattern. (eroti)kill is probably the catchiest track on the album, with a rather non-typical groove, slowed down slightly from the other tracks yet the heaviness keeps my interest throughout the track. Raised On Human Sin is the sickest track, combining elements from a number of underground acts with a solo tossed in for good measure. High On Blood is a rather repetitive track, containing a rather dull solo to start things out before returning to the bands violent slaughter. Robber Of Life starts out with a movie clip sample. , Nailed Ejaculation and By Knife is very much in the same vein as the two first tracks. Haunted By Natural Danger has a rather unusual rhythm, with a very lame vocal effect that sounds a lot like the one used on Morbid Angels Where The Slime Live. With The Silence Came Horror has some heavily Cannibal Corpse influenced riffing, which isnt a bad thing as the track is still pretty cool. Experience The Flesh is the end of Derangeds first full-length on Regain records and the final result should please fans of Cannibal Corpse as a lot of riffs seems to have been taken from Butchered At Birth and Tomb Of The Mutilated, but they add enough of their own flare to the music to make it interesting.