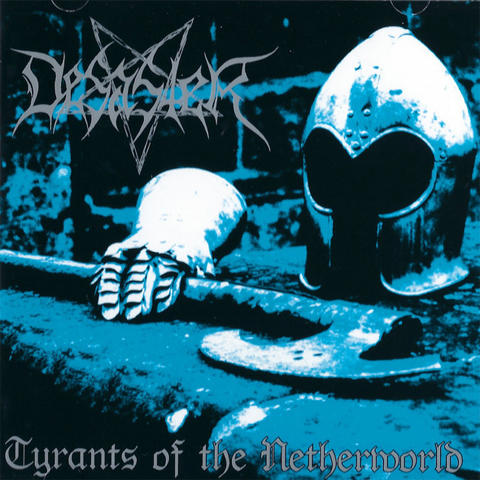 Desaster -Tyrants Of The Netherworld lp

Desaster are a band that have been kicking around the underground for quite some time now and have (rightfully) built up a name as a power black-thrash act that is only growing with time. Tyrants of the Netherworld find Desaster stepping up the slaughter with a warmly produced record of double-time German thrash ala Sodom with a decidedly blackened edge. This material is quite good though, and shows that the band is great musicians with a very strong understanding of what made thrash interesting from the beginning. Tracks like Victim of my Force show the bands Sodom-on-evil hammering in all of it’s glory. Slower marches like Sworn to Avenge also show diversity in the band that allows them to alternate from Sodom-bash to Manowar-stomp. Other highlights include the hammering title track and the swaggering Battle Oath. There is much to choose from on this record and few fans of the genre should be disappointed. There isn’t much of the way of filler here, and this is rare in todays clogged thrash-market. Desaster have learned their lessons well and it’s nice to see that a band is willing to put in the effort to create something that manages to bring thrash to a more atmospheric and creative level than it has seen in ages. These gentlemen only have room to improve and I expect big things out of them in the future.

Track list:
1. Intro
2. Nekropolis Karthago
3. Victim Of My Force
4. Profanation
5. Sworn To Avenge
6. Darkness And Evil-Sabbat cover
7. Tyrants Of The Netherworld
8. Call On The Beast
9. Battle Oath
10. Disciples Of Darkness
11. Reign Of Tyrants