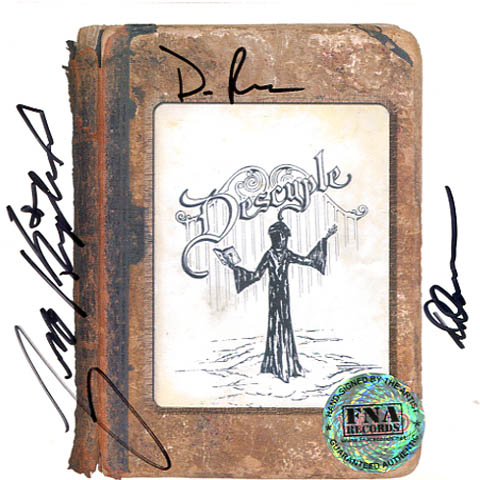 Signed with a black marker on front cover.

The Legend of Descyple was just that….a legendary story that was passed along on the underground and that’s where it was meant to stay. Only 10 demo cassettes of the project ever existed, and the band had about half of them and industry insiders (management, lawyers, A&R reps, etc.) had the remaining few copies. And the project that was supposed to have legs soon died when an entertainment lawyer with connections to Geffen Records couldn’t secure the band with a deal. And that’s it. End of story….or is it. Forward almost a quarter of a century later and lead singer Jeff Kimpland finds out that not only has one of these few tapes in existence made its way onto the European black market, but the people are trading it…and loving it…and trading it some more (all over Europe)…and word is getting out about this awesome band, from the late 80’s, that almost was. E-mails start flooding in asking about this band Descyple and is there an official recording? A better sounding copy? And Descyple, true to its name, now has a group of loyal followers of the bands doctrines, music, and message. Descyple was formed in 1989 in upstate Cortland NY. It was purely a studio project for band founder and guitarist Dicky Reome who was introduced to lead singer Jeff Kimpland by a mutual friend. Jeff brought his good buddy Leon Searls (drums) into the fold and Dicky suggested longtime friend Doug Dann (bass) to round out the project. Dickys parents saw the dedication and heart that these young guys were putting into the project and wanting to support their son and his dreams booked some studio time for the band. The band rehearsed and rewrote songs for two months prior to going into the studio. Dicky’s basement (and then eventually the living room) became the bands makeshift rehearsal room. Dedicated and wanting to prove that this wasn’t a fluke, the band practiced relentlessly trying to perfect their craft. The day to go into the studio came and the band was prepared; but as life has its peaks and valleys, barriers and challenges, lead singer Jeff Kimpland would ultimately face the worst cold of his entire life. Still, Jeff pushed forward, and made the best of the tools he had to work with. This is why if you listen to these demos very carefully, you can hear some slight tonal changes. Jeff’s range was also limited and a little rasp in the voice was introduced giving some of the vocals unique character. The band pushed through the challenges recording for sixteen hours over two days. Ultimately, the band was satisfied with the initial efforts. Afterall, this was only meant to be a demo, and not a final product. However, due to the world becoming a much smaller place with access, or is it actually becoming a larger place with further reach, the fans demands have been heard. So what you have here is a brilliant moment in time. Once again, never meant to be an official release; but nonetheless something the guys in Descyple are extremely proud of. From Dicky Reome’s soft heartfelt guitar playing to his lightning fast shredding and unique guitar solos to Leon Searl’s heart-pounding precision drumming and Doug Dann’s amazing bass playing mixed with Jeff Kimpland’s versatile singing style, the self-titled Descyple album is a pure pleasure and thrill for those who have always heard of the legend of Descyple, but never got to experience the message.