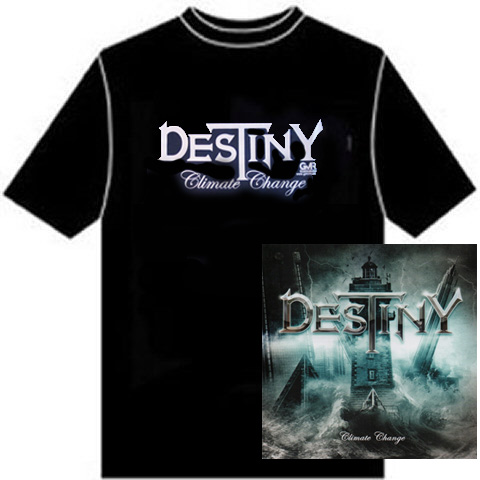 Special bundle deal. Buy this cd and you will get a promotional T-shirt for the album in size Large

Destiny are back! One of the leading bands from the original classic 1980’s wave of Swedish metal returned in the autumn of 2016 with a fresh line-up, a more powerful sound and a point to prove! Although the first wave of Swedish, (and indeed most Scandinavian metal), was overshadowed by the explosion of great acts from the USA, UK and later Germany, fans soon caught on to the fresh sounds from the frozen north. Destiny were one of the leaders of the pack, mixing power metal based alongside ruthless riffing and distinctive vocals, they built a firm fan base at home in Gothenborg and throughout Sweden. Influences from such classic acts as Sabbath and Maiden were mixed with a unique Nordic style and as time progressed they started to garner fans from across the metal world. 1985’s debut ‘Beyond All Sense’ and 1988’s follow up ‘Atomic Winter’ both gained good reviews, and as the 1991 third album ‘Nothing Left To Fear’ solidified their place on the worldwide metal stage the band achieved a cult like status, especially in Japan. Two further albums followed : The ‘Undiscovered Country’ in 1998 and ‘Future Of The Past’ in 2004, as well as a re recording of their debut album which was less than imaginatively titled ‘Beyond All Sense 2005’ An extended hiatus followed, but then in 2016 the band returned with a brand new studio album, Climate Change. Featuring a line-up of : Jonas Heidgert – vocals (Dragonland), Stefan Björnshög – bass, Michael Åberg – guitar (Nostradameus), Veith Offenbächer – guitar (Dawn Of Destiny) and Kane Svantesson drums, the album features 14 classic era Maiden influenced power metal tracks. Epic vocals and classic riffs exemplify just how relevant Destiny are, even 34 years (!) after they were first formed. ‘Climate Change’ is by far their best effort yet and will reintroduce the world to the sound of one of Sweden’s best ever metal acts.